June 4 and 5, 2011, will be the 40th anniversary of the first log cabin tour. It was sponsored by the Brown County Democrat in 1971, with the Nashville chapter of Psi Iota Xi (PIX) picking up the tour as a fundraiser after that. The organization has used the proceeds from the tour and other fundraiser efforts almost exclusively on Brown County projects.

This year’s tour features six homes instead of the usual five, with a large variety of sizes and styles. Bob and Robin Birdsong’s one-room, no electricity, primitivism offers a look at an old-fashioned lifestyle. It sits next-door to another home on the tour, their former home, built by Birdsongs but now owned by Patrick and Linda Nielander. The rough hand-hewn oak log exterior and the corrugated tin roof contrasts with the rich Oriental influences and special decorating touches inside. 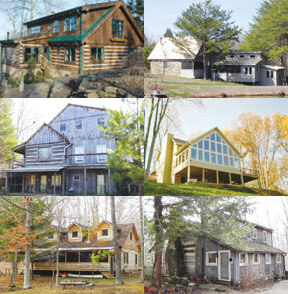 Mike Kelley’s log home presents a masculine lodge feeling with touches of nature, hunting, and fishing, Native American gear, and even a tepee.

The range in the ages of the homes offers another variety—brand new homes—completed within the last five years. Those two homes belong to Mel and Jane Lane and to the couple Dawn Snider and Gary Harden. Lane’s poplar log cabin, built by Mel with local lumber, is a shining example of reusing materials—from the stained glass windows to their claw-foot bathtub. Dawn and Gary’s home is a designer home done completely by Brown County craftsmen and carpenters. Their spectacular view is present in every room.

From the other end of the age spectrum, Jay and Ellen Carter’s home was constructed in 1850 near Greensburg, then disassembled and moved to Brown County in the 1930s. The Carters portray its historical significance with a large collection of antiques and paintings.

From large to small, from rustic to designer, from old to new, from nestled in the wood to high on a hill, these homes offer the range of life in Brown County. But more importantly, the profits from the tour benefit Brown County citizens.

For example, in the 2009–2010 school year, the local Psi Ote chapter donated over $13,000 to the Brown County School Corporation, with grants to the high school choir, band, and drama department, the elementary libraries, and two special literacy projects. Through the annual Reading is Fundamental program, PIX donated three new books to each third- and sixth-grader. The Dictionary Project, also an ongoing annual project, ensures that each third-grader receives a new dictionary from the chapter. Also, six graduating seniors received education awards from the Nashville chapter totaling $4,500.

Other local projects which received PIX funds are the Dolly Parton Project, a book give-away program; local art organizations; and Turning Point, a domestic abuse facility serving several counties as well as Brown County. This year the Nashville chapter received a grant from the state PIX organization to establish child-centers in the Turning Point offices.

In the last few years, Psi Iota Xi has also been active in the art community of Brown County. The chapter has supported local art through participating in Artful Dining, Indiana Heritage Arts, Brown County Art Gallery, and Brown County Art Guild. In addition, the chapter restored the artworks in the County Office Building and served as curator for the artworks displayed in government offices in Nashville.

Funds for these projects are raised by members’ efforts during several events, most notably the annual Log Cabin Tour each June. In addition, PIX sells bedding plants in the spring and mums in the fall to local residents and visitors.

The 2011 Log Cabin Tour takes place Saturday, June 4 and Sunday June 5 from 10 a.m. to 4 p.m. rain or shine. Tickets can be purchased in advance at the Brown County Convention and Visitors Bureau at (800) 753-3255. For complete details visit <www.logcabintour.com>.