Graham “Teed” Howard was in college when he discovered that he had a powerful interest in the culture and society of Native Americans.

“I was going to Purdue and also ran the local Boy Scout troop there,” he remembers. “The older boys said that they wanted to learn about Indians so, with two other guys, I hitchhiked to Wisconsin and talked with some people I’d heard about. They put me on track with the right people,” he laughs. “It was worth the hitchhike.”

Teed trained with both Kiowa and Delaware tribes. “I still do some things with the Delaware,” he says. “I help them teach the 4th grade of all the elementary schools in Anderson once a year. I had a youth group that’s now involved with a Tecumseh lodge group out of Indianapolis—White and Indian. We travel what I call the Powwow dance circuit all the way from North Carolina to Long Beach in California. I’m also part of a warrior society that’s Ponca out of Oklahoma and with the Oklahoma Broken Arrow Color Guard.
“I dance every time I get a chance,” he says. In September he started in North Carolina, then went to Tipton where he taught school, then Anderson where he taught and danced, and finally to Minnesota to dance at Mankato. 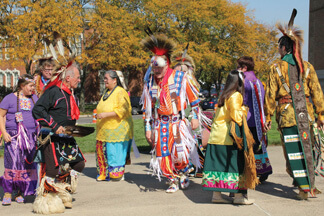 “I’m involved with a lot of things only because I’m acceptable,” he says, which means he’s been trained by the right people, who are convinced of his sincerity and commitment. “It’s all social, you would call them powwows. I dance and sing—chorus, not lead,” he laughs, before stressing, “I don’t take part in ceremonies because I’m not Native American. I don’t interject myself in anything where I’d be questionable.”

There are three types of dancing he performs. The first is called Powwow Dancing, which is strictly social. Another is Show Style, which is for the public. “We did that last Saturday over at the Ethnic Festival in Columbus,” he says. “We also dance what we call Gourd Dancing, which is a warrior type of thing that’s very formal. They’re held in five places across the US—you can watch but you can’t dance unless you’re invited.” 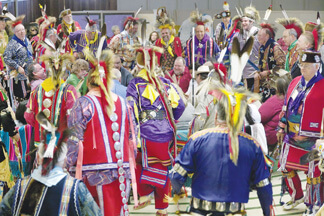 Before Anglo settlers arrived, Brown County was governed by the Shawnee tribe. They gave rights to the Delaware to hunt here and the Miami got the ceremonial rights to Browning Mountain. “They met there at least once a year,” Teed says, “probably during the solstice, although it’s not part of their oral history today.
“At the end of Miller Road (at SR 46), right across where Jack Weddle used to live, was a Wyandotte settlement—that’s why Jack always had plenty of arrowheads,” he laughs. “The Wynadotte was called the Huron by the French. They had a fight with the Iroquois and lost.”

Howard’s interest in Native American history in Brown County, which he says “is not static or historical but a living culture that progresses,” has led him to try and verify some of the myths and stories of Brown County, including the mystery of the jog in the 1809 Ten o’ Clock Line—the treaty boundary that once split Brown County.
While the story is unverified, it’s part of a local family’s oral history. “When they did the 10 ‘o clock line the surveyors found that the white settlers were not going to get the salt part of Jackson Creek so they did a jog in it. There was a fight with the Shawnee and the Delaware about that and the Delaware lost about 40 native men. They buried them standing straight up in a field that was below the family’s house. I asked everybody why they were buried standing up and nobody knew until I was doing some dancing down in North Carolina and the head of the FFA (Future Farmers of America) for the high school said, ‘I used to live with a Delaware in Pennsylvania and they buried everybody straight up because that left more room to farm.'”
Howard first arrived in Brown County as a young man. “I worked for Herman Powell two summers at Yellowwood State Forest back in the 40s,” he says. “When I retired in 1989 I had two places I could go but felt most at home here. 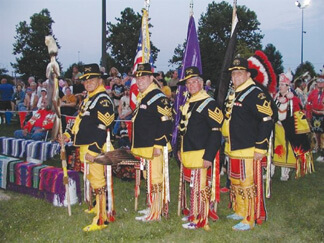 “I have a foot in both worlds,” he says of his life. “There are some of the old ways that I really enjoy and I wish were ours. I try to live the best of each world.”

If you’re interested in Native American culture and dancing the best thing you can do is attend a powwow and talk with some of the participants. Visit <www.powwow.com>, which lists all the social powwows in the United States. You can also contact Teed Howard at <teed@blumarble.net>.