He was once described as so quiet and reserved that he could be mistaken for the village watchmaker or the town printer. His daily routine included smoking cigars. He seldom drank alcohol, was spiritual but not religious, and belonged to a Masonic Lodge. L.O. Griffith was recognized as one of Indiana’s foremost painters whose subject was the scenery of Brown County.

Born in Greencastle, Indiana in 1875, “Griff,” as he came to be known, started his art career in Chicago as a commercial illustrator for Barnes-Crosby Engraving. But he always wanted to be an artist and left his six-day work week with the engraving company to become a freelance artist. By his 20s, Griff made painting and printmaking his primary focus. This dual career as painter and printmaker gained him many awards. He also worked in watercolor and occasionally did woodcuts and sculptures. He even made his own frames. A man of strict scheduling and precision, he rose every day at 6:00 a.m. and painted in his studio at a slow and methodical pace, often from sketches he had made in the field. His etchings in particular were works of perfectionism, whether in black and white or in multi-layers of color, bringing the artist fame for the subtle tonalities of his aquatints. 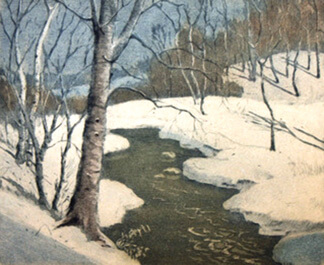 As a painter Griffith worked primarily outside, especially in the fall and spring. He invented a portable, easily mountable alcohol burner to warm his glue so he could paint outside even in freezing temperatures.

When he was five, his family moved to Texas. He left home at the age of thirteen and worked on a ranch, then as a bellhop in a Dallas hotel. He continued drawing obsessively during his entire childhood. “I drew everywhere, and on every available surface,” Griffith once said. With his various jobs he earned enough money to pay for some art lessons.

By the late 1890s when he started at the Chicago engraving company, his talents and practiced skills were easily recognized. He became a member of the Palette and Chisel Club in Chicago. It was there that he was able to continue his art studies. He was known as the “Old Bachelor Guard” by his fellow members because they were married and Griff was still single. As a group, the club took sketching trips outside the city and set up to paint the outdoor scenery. Adolph Shulz, who was a member and had already visited Brown County, encouraged Griff to travel to this artists’ retreat in Southern Indiana in 1907. A Chicago writer remarked of the returning artists, “Their enthusiastic response to the region’s pristine beauty enticed other members to make excursions, thus seeding the establishment of a new art colony in the Midwest.”

While working in Chicago, Griffith married Carolyn Maulsby in 1920. In 1922 he sent off an illustration of a ham to a meat-packing firm. The company’s art director sent it back with the notation, “Make ham more graceful.” This comment didn’t set easily with Griff, so he, his wife and young son began packing for the county seat of Brown County where they had visited for a number of years. A couple of years later he built a home and studio out of what once had been a creamery.

Griffith painted in Indiana for about 50 years. But those cold Midwest winters still did no favors for the artist, so from 1926 to 1930 Griffith returned to Dallas for visits that lasted sometimes for several weeks to several months. But come spring in the Hoosier state, he always returned to Brown County where he became active in local politics and the burgeoning art colony. “Brown County is conducive to thought and work,” Griffith once said. He remained in his Brown County home until his death in 1956.