Wanda Brown, Pam Raider, and Davida “Davie” Ericson met when they were all attending a Course in Miracles. Wanda was a retired arts teacher, Pam a retired social worker, and Davie a retired volunteer. Discussions from the Course in Miracles continued at the Daily Grind. Then they started meeting weekly at Wanda’s home. They studied deeply and shared openly between themselves. They discovered similar thinking, values, and beliefs—finding a fertile place to test out assumptions, new ideas, or retread old ones.

Each read challenging books and got input from the other two. The depth of honesty honed from their mutual trust and searching led the Thursday morning gatherings to become a spiritual discipline at times. The fruit was an original periodical, Brown County’s Reflection Rag. The Rag was first published bi-monthly, and later in its publishing life, quarterly. Early on it was four pages in length, but later grew to ten pages. It had a lifespan of fifteen years and was named for one of Wanda’s musical favorites by Scott Joplin, the ragtime pianist.

The maturity of their friendship reached a level only earned by those willing to put in the time, truth, and mutual respect of their individual perspectives. Several weeks were spent in developing a topic. Some of the themes included: Rhythm, Beliefs, Dialogue, Stories, Recovery, Legacy, and Wisdom to name only a few. They shared their writings and accepted help and criticism of the other two in expressing themselves. Some readers commented on the evolution of their individual personal views and writing skills. Pam recalls the discussions as “a magical time to explore our creative side” and the new thinking we were reading about. Carrying thoughts out to readers through the Rag completed the creative process. 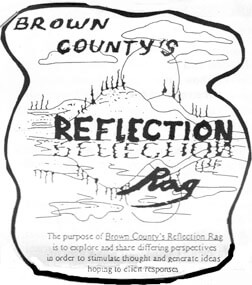 “A sign of maturity is the ability to accept criticism as information.” Copy was typed on Davie’s Selectric typewriter. Wanda provided the graphics. Mock-ups were of the era when they were literally cut and pasted together. When technologies progressed to personal computers, Pam took over as word processing replaced typing. Brown County’s Reflection Rag was then copied on a Xerox machine kept in Wanda’s laundry room. 500 copies would be made, the top sheet always colored, the rest white. All the collating, folding, and stapling were tasks of Thursday mornings.

The timeline of copiers is part of the nitty-gritty of the Rag’s history. Copier #1 was donated to the Rag when John Franz learned that the Chamber of Commerce was upgrading their copier. The Rag got the one being replaced. Copier #2 became available when Wanda’s daughter-in-law, who worked at a bank in Columbus, informed them when a copier was available cheap because the bank was replacing one. Copier #3, also used, was bought outright.

The Rag was given away free at the IGA, Library, the Visitor’s Center, and Brownie’s in Bean Blossom. Financing was simple, with funds coming from garage sales, donations from readers, family and friends, and one “elderly man living in Southern Indiana sent $100.” Individual issues were mailed to those who supplied the pre-email SASE, “self-addressed stamped envelope.”

The Rag was an independent publishing venture—no advertising! New directions were started when the Rag started printing readers’ comments. There was enough response from the reading public for the three women to know it was thought-provoking, or as Pam says, “…the importance of questions. We posed challenging questions to our readers.” The poetry, essays, stories, and comments provided a valuable means of discourse to the entire community. Under the edition and volume on its cover page was a small box that highlighted the reason the Rag exists: “The purpose of Brown County’s Reflection Rag is to explore and share differing perspectives in order to stimulate thought, generate ideas and elicit responses.”
Though at times others joined the venture, it was mainly mothered through its lifetime by Wanda, Davie, and Pam. Davie retired from the Rag after eleven years when she sensed that the “original idea had flowered, then it was spent.” She adds, “Wanda’s house was our temple of creativity.” The last issue was Fall of 2010. Says Wanda: “I miss it.”

On Story Telling:
Humans are inclined to make meaning, it is at the root of our “story telling.”

On Realization:
Given the most basic needs having been met, what takes us beyond survival and into realms of our fullest development?
For human beings, long after apparent growth has ceased, mental and spiritual growth may continue indefinitely.

From Chaos:
Imagination and creativity may arise from out ability to dip into the “underlying rive of chaos” always residing below the surface of our conscious lifre. Chaos is full potential and possibility.

Falilure:
Most of the great achievers throughout history have many failures behind them.

Revision:
As an exercise in hope and renewal can we stretch our imaginations to revision a world that works for everyone?

Collaborative Effort:
Our collaboration on “The Rag” is a balancing act between working together and working alone; the spaces being as important as the union. In our discussions each week, we bring to the table our reflections and insights on the particular topic. One thought leads to another as we tie together events, books or movies. Our conversations sometimes range far a-field encompassing subjects not on the specific topic. However, all is considered “grist for the mill” as it primes the creative pump.