Brown County artist Martha Sechler’s painting desk is covered in mementos from her creative life; there are feathers, interesting sticks, small stones from the places she’s travelled, photos of loved ones, and a window that looks out onto Yellowwood State Forest.

While she’d like to build a bigger studio in the future, this one has served Sechler well, functioning as her artistic sanctuary during her busy years as a full-time school librarian and mom, and seeing her through countless phases in painting and creating, including this new chapter, where she’s using her semi-retirement as a reason to devote more time to her artistic life.

Although she enjoyed making art throughout her childhood, it wasn’t until Sechler graduated from the University of Evansville and moved to Arizona that her painting life really took off. For four years she worked on a Hopi Indian reservation, took painting classes in the summer, and painted in her free time.

It was the scenery that captured her imagination in Arizona, but her focus shifted to people during her Peace Corps stint in Mandeville, Jamaica; some the paintings of market women and ladies walking with baskets on their heads are on the walls of her home today.

Selling the paintings turned a profit she could use to buy books for the schools she was working with. By the end of her time there, each of the five schools had 20 books. “That felt really good,” she said.

Since the local teachers weren’t used to having books available in the classroom, Martha familiarized them with the art of reading aloud. The seeds for her future library career, highlighted by storytelling, had been planted.

Upon returning home, Sechler began pursuing her Master’s degree in Library Science at IU. There she met her future husband, Kim, who was finishing his Master’s in education and was in the process of buying a house in Helmsburg. The couple got married on the porch of that house in 1979 and it has been home ever since.

Sechler started working as a librarian for the Brown County public schools in 1981. “They had never had a librarian at the elementary level—they just had a room with some books in it,” she said.

She began putting together a card catalog (typing out the entries on a manual typewriter), and started incorporating storytelling into her time with the children. “That was the best part of the job,” she said.

Life got busy once the couple adopted their two sons, who are now 26 and 30. In her limited free time, Sechler painted, and when the boys grew older, she started participating in a few art shows, and joined the Brown County Art Alliance. “It’s a nice way to get to know each other and it’s a great support,” she said. 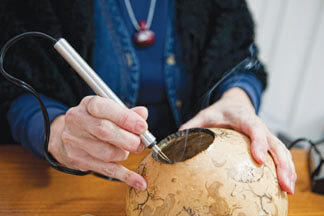 Today, Sechler is retired from the school system and works one day a week at the Brown County Public Library. As a part of that job, she visits the county elementary schools to tell stories. There is more time for her own art now, and the little studio in the back room of her house is getting more use.

Much of Sechler’s inspiration comes from the nature in her backyard, which is flanked by the forest. Rocks, water, fish, and all aspects of trees (“whole trees, parts of trees, roots of trees,”) have become favorite subjects.

Sechler doesn’t paint scenes literally, and if she starts a painting by looking at a picture, it’s only to get her started. “I like to paint the essence of things, rather than what they really look like,” she said.

Six years ago, friends started bringing Sechler dried gourds to decorate. First she painted faces on them, and lately she’s been using a wood burning tool with a hot metal tip to draw patterns on them, covering them with varnish when she’s done.

Sechler designed the whimsical “Tambourine Man” logo for the 2011 Lotus World Music and Arts Festival. The design came from a painting she had done in honor of her mother, who passed away in 2009. “She was so full of life and had so much fun, so I did a whole series of paintings called the Hairy Melon series; her name was Mary Helen,” Sechler said.

These days, Sechler is interested in continuing to evolve artistically and trying new techniques. “I just want to do as much experimentation with watercolors as possible,” she said.

Even after all these years, courage and flexibility are required to keep growing. “People are so intimidated by not being able to draw well, or paint within the lines. You need to just sit down and experiment, and try not to focus on a product; just have fun with it, and see where it takes you,” she said.