Folks will plan their end of summer 2012 celebration to include an event that has had a living pulse since 1877, the Brown County Old Settlers Reunion. The temperature will no doubt be high, food will be tasty, music by Reel Tyme String Band and Smooth Country will have toes tapping, and the karaoke will be as popular as it was last year.

Brown County’s Historical Society and Genealogical Society will have publications available for family and local history buffs. Organizers have assured that there will be space available for anyone else to share their own family exhibits. Displays will include old tractors and tools, as well as beautiful quilts.

New this year will be entertainment by the Electric Impulse Cloggers and a booth by the Pioneer Women. There will be an auction, flea market, face painting, the traditional bean pot, ring toss, hair braiding, and tractor pull. There will be a competition for hog calling, sawdust scramble, and the activities will close on Saturday night with fireworks.

This year’s Old Settlers will salute Bean Blossom’s own Jack and Nina Jo McDonald. Couples honored in the past include Jean and Dale Bond, and Garnet and Ralph Parsley.

Minutes found in the Brown County Historical Society Archives yield rich details of Old Settlers past. On September 22, 1877, records of the Old Settlers meeting say the day started early as wagons “began pouring in from all sections of the County…” as an enormous crowd gathered in Georgetown (now known as Bean Blossom). A three-person committee worked ahead of that date to record the names of all persons living in the county thirty years or more, with the intention of reading the list at the first gathering. 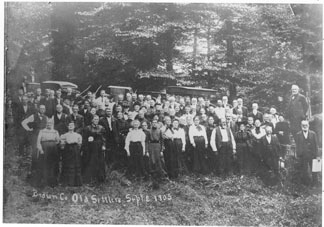 From the beginning, music has been part of Old Settlers. The Nashville Cornet Band arrived in a richly decorated wagon, pulled by four horses, and performed at the first Reunion. The opening prayer was led by Rev. Benjamin Woods, address of welcome by William M. Waltman, and an hour-long address was delivered by Judge James S. Hester. An executive committee was formed at that time so the Old Settlers Reunion would continue. It included a president, secretary, treasurer, and three representatives from each of the townships. With business completed, William W. Mason spoke to the assembly about his experience in the early settlement of Brown County and his first attempt at shoe making and “other hardships.” The minutes of that first meeting ended: “The day was one of interest and profit to both old and young. All were satisfied and felt amply paid for their trouble and returned to their homes with a firm resolve that if God spared their lives and gave them health that they would be at the next reunion one year hence.” A beautiful cane was awarded to the oldest man, Edward David, who was 92 years old and had lived in the county 64 years. It is recorded that Mr. David was so pleased by the honor that he danced a jig. Margaret Graham, oldest woman at 83 years of age, received a hickory rocking chair.

Attendance has always fluctuated with the weather. In 1878, the Reunion was held in Nashville and the day was dark and rainy. The crowd was much smaller than the year before.

The 1881 reunion held in Goshen, just three miles east of Georgetown, was noteworthy that John Prosser and wife, each 84 years old, living together for 63 years and residing in Brown County 44 years, received an elegant Bible. The oldest person that year, Green Graham, was 91 years old and he received a pair of spectacles. Allen S. Anderson made “some 30 nice canes” and presented them to the oldest persons present.

In 1883, again in Georgetown, a foot race was run by the old men present. A hat was presented to Brasillia Horner for best in the foot race. A cane was presented to John Richards, Sr. for killing the most bears and to Milla Hamblen for having the greatest number of children.

In 1885, awards included a Bible to William Markum and wife for living together 62 years; a cane to Jesse Hamblen for living in the county the longest; a hickory rocking chair to Mrs. Tucker for oldest female settler; a pair of pants to A. A. Hudson for father with the greatest number of sons; and a dress pattern to Rob Robison for mother of the greatest number of daughters.

In 1886, it was calculated that there were no less than 6,000 present as 700 wagons and buggies arrived, plus those on foot or horseback. That year a cane was given to Louis Dupree for becoming a father at the age of 74; a pair of specks went to Nancy Walker, 80 years of age and grandmother of 97 children. Andy Petro, 78 years old and weighing 75 pounds, was given a pair of pants for being the lightest man present over 60 years of age.

This year’s Old Settlers will be located at the Bill Monroe Memorial Music Park and Campground in Bean Blossom. It will begin on Friday, August 31 at 5 p.m., continuing on Saturday, September 1, beginning at 11 a.m. and ending after dark with fireworks. Attendance and parking are free. Information on camping and lodging can be had by calling (812) 988-6422 or 1-800-414-4677; email at <beanblossombg@hotmail.com>; or online at <www.beanblossom.us>.