After 25 years of attending shows at the Little Nashville Opry in Brown County, Martinsville businessman and morning radio host at WCBK Scott Wayman, is living his dream.

Wayman grew up in Martinsville, Indiana. After high school, he worked at the radio station as a fill-in for a while and decided to stay on. “I always loved country music,” Wayman smiles. “I am enjoying fine country music and getting paid for it.”

His parents, Gail and Darlene opened Wayman’s Furniture and Appliances in 1985 and Wayman spent his time between the radio station and the store. He now owns the store with his parents and also owns Kern Advertising, a billboard company in Martinsville.
Over the years, Wayman attended many shows at the Opry. As a radio personality, he spent a lot of time backstage with musicians and introducing acts on stage. A few years ago, he and his parents considered buying the business from previous owner Esther Hamilton, and were in negotiations when disaster struck.
On Sept 19, 2009, the Little Nashville Opry was burned in an arson fire. 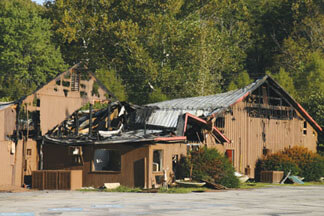 Wayman and his parents were shocked when the fire destroyed the well-known attraction in Nashville. “I was devastated,” he says. “By the time we got over there, it was pretty much gone. I thought the dream was over.”

Over the next three years, he refused to give up. He waited for the property to be put on the market and in March of this year, Wayman bought the property off the auction block for $58,000 in a commissioner’s sale. He was the only bidder and plans to take possession in September.

His vision to create a new Opry in Brown County includes seating for 2,000 and a run of three to four shows every weekend. He also plans to hire a cook and serve home-cooked meals for the entertainers. “The place has a lot of history,” he explains. “It was a place where the artists enjoyed themselves. It is really a large, small venue and was once voted 2nd best food on the circuit for entertainers.”
The Little Nashville Opry originally opened on Apr 4, 1975 with Cal Smith and Mickey Gilley. Some of Indiana’s top musicians and country music’s popular performers appeared at the Opry, as well as Tom Jones and Wayne Newton. “The Oak Ridge Boys played every year at the Opry except for one,” he adds.

Wayman has many memories of his 25 years at the Opry. He remembers when the Stafford Brothers played to sold out crowds with four shows a weekend. “I remember one night Charley Pride was performing and joked with a woman who was on her cell phone,” he laughs. “After finding out the woman was on the phone with her mother who couldn’t make the show and was requesting a special song, he took the phone onstage and sang to her on the phone.”
He also recalls the musicians who performed at the Opry always felt at home. Wayman recently attended the Country Music Association’s music festival and spoke to singer-songwriter and television personality Bill Anderson. “When he saw my t-shirt with the Little Nashville Opry logo, he knew who I was,” he says. Country star Doug Stone told Wayman that the Little Opry needed to come back. “I think the people of Nashville should feel proud that musicians remember the Opry.”

He is currently working with contractors and booking agents and hopes to open the season in late summer of 2013. “Realistically, you just don’t know,” he says. He will keep the same size of the original music hall, but build in a different location on the property. Patrons will be able to purchase tickets online making it easier to attend the events.

Wayman will continue the morning show and run the advertising company and furniture store for now. He is looking forward to being at the Opry full-time when it is opened. He is also ready to move ahead and already has the new billboard sign to put up when they get approval. “I really want to continue the legacy of the Opry,” he says.
With his contagious smile and excitement about the project, Scott Wayman is the new guy in town with an impressive vision. He adds, “I knew I was going to be excited, I just didn’t know everyone else would be as excited.”

For more information on the grand opening of the Opry or to get on their mailing list, visit
<www.littlenashvilleopry.net>.