Skip to content
Growing up with the Artists, Paul Page

Paul Page explains the sequence of the Martz pottery made especially for his parents. The design on each plate represents a milestone in their lives—their marriage, the birth of Paul, moves to the city and the country, and a 25th wedding anniversary. The beautiful one-piece chest was made by Paul’s father.

Growing Up with
the Artists

A Visit with Paul Page

The other day someone asked me, “Was there really an art colony in Brown County?” I answered, “There still is,” but it got me thinking about what we really know about the old days and the legendary artists of Brown County.

Fortunately there are still people around who knew them personally. To Paul Page the artists of Nashville’s colony were friends of his parents, adults like any others, who hosted scout troops or gave him a ride home when they saw him walking along the side of the road. But there was one special artist he knew best, the quiet, reserved man known as “Griff” by his friends and L.O. Griffith by the art world.
“I was always interested in art, although basically in Griff’s,” Page relates from a comfortable chair in his living room. “I knew him better, there was the association with my parents, and from spending time with him. I’ve got one etching that says, ‘To Paul from L.O. Griffith’ and it’s a picture of the IU Union building,” Page remembers fondly. “It’s from my high school graduation.” 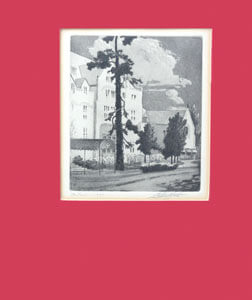 Etching of the IU Memorial Union.

Page and his pal Jack Weddle would often visit the artist in his studio. “He would let us turn the handles on the press,” Page says. “Griff was pretty handy with paper and making different designs. I can remember him coming up with games. He had a nice little chuckle.”
Paul’s parents were both from Kansas but lived in New Jersey where his father taught at State Teachers College (Kean University). “Dad was also teaching summer school at Northwestern while my mother and I were in Kansas visiting family,” he says. “My father had heard about Brown County and on his way to pick us up he came down to Nashville. Cecil David took him out the next morning and he ended up buying 80 acres. He called my mother and said, ‘I bought 80 acres in Nashville.’ She said, ‘What are you doing in Tennessee?'” Paul laughs. “We built a summer cottage here. My Mom and I would stay there while Dad taught at Northwestern and he’d come down on the weekends.”

After World War II, his father decided he’d had enough of the academic world, moving his family to Brown County to build early-American furniture instead. “My parents were friends with L.O. Griffith, Dale Bessire, the Shulzes, the Loops—all the old time artists. Griff was probably my favorite. My folks and the Griffiths ate together twice a month. We spent a couple of Thanksgivings with them because they had no family in the area, other than their son Richard, and we didn’t either.”

He got to know the potters Karl and Becky Martz after his parents gave them property nearby. “They built their cabin with their own hands and lived in two tents out by the park,” he says, “Eric and Brian, their sons, were in one tent and Karl and Becky in the other.”
His father also gave Onya La Tour land on a nearby hill. “I can remember Onya with her long skirt, carrying her scythe, mowing that entire hillside on her own. Oh, she was tough!” he adds of the former artists’ model at the heart of her own defiant subset of the art colony. “She was at my folk’s house once a week, always trying to get me interested in art,” he laughs. “Karl and Becky tried to get me interested in throwing pot and I could have cared less!”

His viewpoint was that of a boy in a town full of friendly neighbors. “Alberta Shulz had no children but she used to invite kids up at Halloween and have a party with hot chocolate and cake. Leota Loop’s son Max was a Boy Scout leader and I can remember going up to their home and she’d have cookies. Curry Bohm and Lillian would often come out to the house for dinner.

In the summertime he and Jack Weddle would lifeguard at the park pool. “(Indiana University President) Herman Wells used to come over there about every day. He’d get in the pool and just stand in the water splashing, almost like self-hypnosis. I’d say, ‘Hello, Dr. Wells.’ and he wouldn’t even know I was there. He’d be miles away in thought. After a while he’d break out of his trance and be fine. If I was walking home and he was driving by he’d stop and pick me up. He did that for everybody. What a delightful man.”

Page left Brown County for medical school in Chicago, not returning to stay until 1992. At 79 he is still working a couple days a week at Brown County Health Support Clinic. “It makes me read to stay abreast of things,” he shrugs with typical modesty.

“Through the years I’ve been fortunate to collect some of their art.” he says of the paintings, sketches, and prints of Brown County landscape that grace his walls, but there is no mystery about the artist that hangs on most of them—L.O. Griffith.