Skip to content
The Gem Mine and Rock Shop

The Gem Mine
and Rock Shop

When Matt and Amy Gray opened the Copperhead Creek Gem Mine and the Brown County Rock & Fossil Shop, they did it to fill a niche market and because they were interested in rocks. What they didn’t expect was how much delight the businesses would create for everyone involved.

“People get so excited. I love sitting out in the gem mine and seeing what people are finding. I love kids’ voices when they find a really great rock,” Amy said.

The Grays moved to Nashville in 2003 to be near family and open an art gallery. Matt bought his first art gallery when he was 21, and over the years he and Amy have owned six different venues. So when they discovered that the retail space at end of the block north of the Brown County Courthouse was for sale, they saw an opportunity for their next entrepreneurial venture.

The Iris Garden Fine Art Gallery was born, along with the Iris Garden Downtown Cottages and Suites. The rest of the spaces continued to be rented by seven different tenants that already occupied them. But over time, attrition left just two tenants, The Ice Cream Cottage and The Trolly. The Grays took over the empty retail spaces.

There seemed to be an open niche for child-friendly businesses in Nashville. “So many families were coming into the shop saying that Brown County is really nice but we don’t find a lot of things for kids to do in town,” Amy said.

Shortly thereafter, on a family vacation, the Grays found themselves at a small gem mine operation. Amy recalls sitting at a picnic table thinking about how fun it would be to have something like it in Nashville when Matt walked up and said the said the same thing. In 2007 they unveiled the Copperhead Creek Gem Mine. 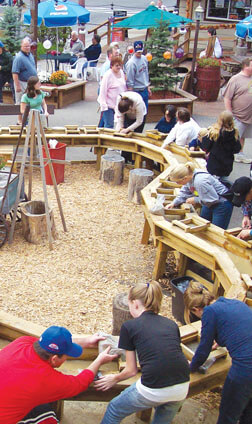 The gem mine’s setup is simple. Customers purchase a bag of dirt with either gems and minerals, fossils, or arrowheads buried in it. They pour the soil into a box with a screen in the bottom, immerse it in the running water of the 50-foot-long sluice, and watch as the dirt washes away and reveals the treasures that lie in waiting.
The couple is continually delighted by how much joy their business generates. Kids aren’t the only ones who enjoy the gem mine. Matt said parents often come in for their children’s sake, but then get curious. “The next thing you know, they’re buying a bag for themselves and nudging in beside their kid,” he said.
Amy recalled the time a 95-year-old woman came in and declared that mining for gems had always been on her bucket list. Her strength wasn’t what it used to be and she didn’t see herself making it to Alaska to pan for gold. “This is it, so give me a bag of dirt,” she declared.

“She stayed all day long, it was great,” Amy said.

Customers told the Grays that they’d like to be able to purchase more unusual stones in addition to their gem mine quarries. So in 2009, they added the Brown County Rock & Fossil Shop.

The shop has become a hub of rock hound activity in the area. “We have a ton of geologists that come in, and they always like to come back to see what’s new,” Amy said. Frequently, clients will bring in something they’ve found and the Grays will help them identify it. The Internet is a big help, as are other customers.

Amy is particularly intrigued by fossils. She likes watching people’s reactions when she shows them an Orthoceras, which swam the Grecian seas more than 400 million years ago. “It’s neat to look at these fossils and see that it’s an ancestor to the modern day mollusk or squid,” she said.

The whole Gray family participates in the business, to one degree or another. Daughter Josie, who is almost 15, loves learning about the rocks and helping her parents. Son Tanner, 14, likes talking to people up in the gem mine.

The Grays hope to see their businesses thrive well into the future. “It’s the same dream for all Brown County businesses. I hope the economy holds so that people are able to spend good family time together and get away to places like Brown County, Indiana,” Matt said.