The Breeze Bends
the Grass

Written by Arbutus Cunningham, with music by Krista Detor, the musical explores the lives of these women along with the Overbeck sisters of Cambridge City, famed for their ceramics, and Janet Paine Bowles, a teacher and metalworker from Indianapolis.
“Arbutus is the powerhouse behind it,” says Jaime Sweany, director of the Brown County Art Guild. Detor is another powerhouse—producing, writing music, and performing. “It’s a joint effort,” Detor says. “Arbutus has written much of the libretto, I’ve written much of the music; I’ve created the scene settings and interaction, she wrote the dialogue—it falls into the ‘two minds are better than one’ category. Luckily, we have an amazing cast.”
Amanda Biggs, who plays Selma Steele and Genevieve Goth Graf, comes from the IU School of Music. An internationally award-winning soprano—with roles as Mrs. Lovett in Sweeney Todd, The Reverend Mother in The Sound of Music, and as Tosca—Biggs is “a voice of uncommon beauty,” according to opera star Aprile Millo. “She’s a woman with a bright future and I wanted to grab her while she’s still here,” Krista adds.

Anne Hurley was studying cello at the IU School of Music when she met Jim Krause. In the years that followed they’ve made and written music for cello, guitar, mandolin, and bass. Of their debut album, Madeleine Bay, Lee Williams of the Lotus World Music Festival says, “Jim and Anne have crafted an album of exceptional beauty and artistry.” 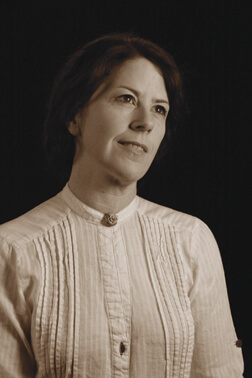 Krista Detor, who shines as Marie Goth, has reached an international audience from her base camp in Bloomington. #1 on Euro-Americana charts and co-creator of the popular Wilderness Plots program, “She would be good on every stage in the world,” lauds Rolling Stone magazine.

Arbutus Cunningham, who appears as the eldest Overbeck sister Mary Frances, was said to have “stolen the show” at the recent Ted-X Bloomington by the Bloomington Herald-Times. Known for incisive humor and wit, Cunningham has long delighted audiences of her weekly Saturday morning show Old Time Train 45 with foil Colonel Kelsey on WFHB Community Radio.

The play is based on a shorter piece commissioned by Marcia Bradford and performed at the T.C. Steele State Historic Site in June of last year. There are four acts, each highlighting an Indiana artist or artists—Janet Payne Bowles, Selma Steele, Marie Goth, her sister Genevieve Goth Graf, and the five Overbeck sisters: Margaret, Hannah, Harriet, Elizabeth, and Mary Frances.

“There’s a sort of overture at the beginning where we squash ten centuries of women’s art history into fifteen minutes of songs and brief narrative bits,” Arbutus says.

“All the women were Indiana natives and successful artists active in the first half of the 20th century,” she continues. “Most were, in one way or another, influenced by the Arts and Crafts Movement, with its emphasis on the value and dignity of hand work and its commitment to making art accessible to everybody. The broader historical context is, of course, the history of women’s rocky road to artistic careers,” she says. “The ones that did rise to some level of fame had to have a ton of tenacity and fortune.

“Janet Paine Bowles was one of those women,” Cunningham adds as example. “She was a metalworker who made a chalice for the Vatican and golden spoons for J. Pierpont Morgan.

“But for the rest of them you’ll just have to come see the show,” she laughs.

The Breeze Bends the Grass takes place Friday and Saturday, May 25 and 26, starting at 7:30 pm. On Friday, before the show, the cast will be in full period costume at the Brown County Art Guild, 48 South Van Buren Street, with Krista Detor entertaining on Marie Goth’s baby grand piano.