Paul Sackmann has been collecting antiques since he was three. “I just got it in my blood that I liked to search out old antique things,” said Sackmann, who tagged along with his mother and grandfather on their antiquing expeditions, keeping his eyes pealed for interesting old coins, bottles, and jars.

The passion only grew with the years, so it is fitting that Sackmann and his wife, Paulette Justice-Sackmann, are the owners of Plum Creek Antiques in Nashville.

“I love what we’re doing. It’s just really exciting— we have people from all over the world in there,” said Paulette, who said the Bill Monroe Bean Blossom Bluegrass Festival brings in celebrities as well as visitors from all over.

Plum Creek originally opened its doors in Helmsburg 13 years ago. The Sackmanns, who are from Brown County, always wanted to own a shop in Nashville, so when their current location went on the market five years ago, they eagerly snapped it up. 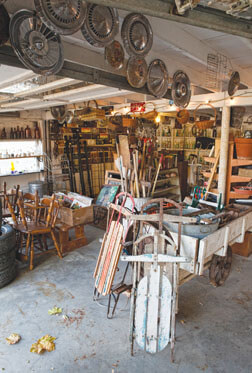 “It was a former fruit market for forty years, and we thought it would be a good place for us to have an open-air antique market,” Paul said.

The shop, which is open from the first weekend of spring through Thanksgiving, is enclosed by a series of six garage doors that can be rolled up in fair weather. “We spent a lot of time doing construction just to get us up and running,” said Paulette, who is anticipating adding an office to the building soon.

The couple spends the winters restocking the store. “We build the place back up,” Paulette said.

The antiques come from auctions, stores, and more unusual locales. “If there’s an old dump somewhere, and I can get directions and permission, I can dig some pretty old bottles out of there,” Paul said.
The couple has also been known to buy old buildings that are slated for demolition and sell the architecturally interesting parts.

Plum Creek features high-quality American-made objects, and included among them are the couple’s cars; she drives a 1930 Model A Roadster pickup, known as Katy-Did, while he drives a 1949 Model Ford pickup. Paul, who likes fixing up old cars as a hobby, keeps them roadworthy.

“A lot of people stop because of the old vehicles out there; even people who don’t think they love antiques stop and they love it,” Paulette said. 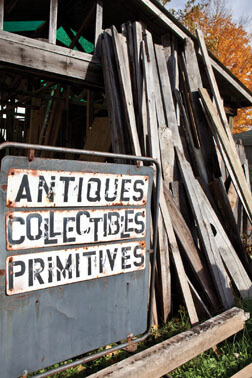 TV and the Internet have created new dynamics in the business. The popularity of the website Pinterest.com, where users collect images of things they like, has brought a variety of new customers in the door.

Lately, a number of customers have coming in looking for metal rake heads to recreate wine racks they have seen on Pinterest. Artists use the store in a similar way, gathering interesting objects to incorporate into their work.

“We’re almost like a supply store for artists; they repurpose a lot of things that we carry,” Paul said.

Other modern trends, like the treasure hunting reality shows that have become popular in the last few years, can give novices a warped perspective about the value of the junk in their attic. “A lot of the American Pickers shows make people think the things they have are worth a lot more than they really are,” Paul said.

Sometimes, however, happy surprises do occur. Although they have been in the business for more than a decade, even the Sackmanns can be startled by the value of unusual merchandise. One time they purchased a box of random goods at an auction, and it contained a Dupont-brand box of dynamite blasting caps from around 1900.
“It was something that somebody threw away, and we took it on and sold it for almost $200,” Paul said.

Sometimes, it goes the opposite way. The Sackmanns sold a couple a heavyweight 30-gallon cooking kettle for a few hundred dollars, and later the buyers discovered it was worth around $3,500. “It was just a historically good piece of Indiana history,” Paul said.

The Sackmanns themselves take very few objects home. “I’m kind of a minimalist— it takes something pretty special for me to want to keep it these days,” Paulette said.

Nevertheless, the Sackmanns continue to enjoy the quest for treasures to stock their shop with. “We just love antiques and old stuff, it gives us a license to buy them and keep them in the store until we adopt them out to a new home,” Paul said.

If they can connect an interesting object with an eager customer, they’re happy. “Instead of the items going to a landfill, we can get the young people interested in them, and a lot of people repurpose them in this day and age. We just feel like we’re an adoption agency to get them out to people who love them just as much as we do,” Paul said.