Skip to content
eXploring Brown County from the Air

eXploring Brown County
from the air

I am standing on a wooden platform 65 feet above the ground, preparing for my third zip line ride of the night. My guide, Greg, assures me that everything is set for my flight, so I take a deep breath, sit back in my harness, reassuring myself it is secure, and raise my feet off the platform, releasing myself into space. I glide for 190 feet in the darkness toward a second platform, supported by the steel cable which I’m secured to.

When I get to the other side, a second guide, Drew, congratulates me on my landing skills like I’ve just achieved something remarkable, and I must admit I feel proud of myself, and exhilarated from trying something that feels so adventurous, yet safe at the same time.
This is a typical evening at work for Greg and Drew, employees at eXplore Brown County at Valley Branch Retreat, an outdoor adventure center tucked away in the woods east of Nashville. The retreat, owned by Gary and Patricia Bartels, includes 13 zip lines, including the longest, fastest, and highest ones in the state.

In 1994, the Bartels inherited 500 acres of Brown County woods from family, and instead of carving it into a housing subdivision, they decided to take it on as a family project with their two sons and make it into an adventure retreat center. Valley Branch Retreat, as they called it, eventually included a lodge, mountain bike and ATV trails, and paintball facilities, along with cabins and an event hall.
Eight years ago, Patricia and Gary visited Costa Rica, the original home of the zip line. Inspired, they began to imagine creating their own version back in Indiana—eXplore Brown County was born.
Although there are no national requirements for zip line safety inspections, the Bartels have taken it upon themselves to get their setup accredited by the Association of Challenge Course Technology, an organization that sets industry safety standards. Their staff does daily inspections of the cables before opening for business, and Gary himself does a monthly inspection.

The 13 zip lines are divided up among four different tour packages, including the night flight, which I experienced, and two that include flying over a lake. A “Zippin’ Zombies and Terrifying Trail” package will be offered during the Halloween season. 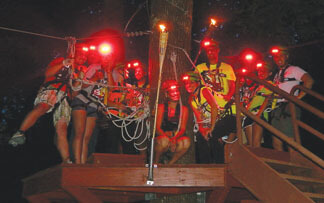 The park’s newest feature is the “Indy,” a quarter-mile long zip line which debuted in the spring. “It’s the longest, fastest zip line in Indiana. It’s a huge adrenaline rush, especially for people who have never done zip lines before,” Patricia said.

Zipping, despite its adventurous reputation, is accessible to a wide range of people, Patricia said. The only restrictions are that you must weigh between 65 and 270 pounds and don’t have a condition that might make it dangerous for you to ride.

“We’ve had numerous disabled people, people with MS, people who are missing appendages,” Patricia said. Octogenarians have zipped, crossing an item off their bucket list, along with people who use walkers.

Although the lines take off from the second highest point in the county, there is no hike to get there; an army truck drives participants up, and you don’t have to get a running start, you just step off the platform. “The most difficult thing is the ability to climb four steps, other than that you’re just flying through the air,” Patricia said. 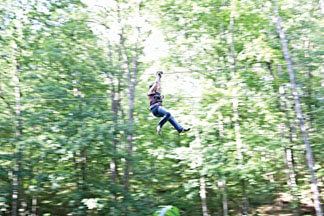 Even more surprising than a grandmother whizzing through the air was the sight of a bride and groom zip lining, which happened at eXplore Brown County’s first adventure wedding in July.

“Most people go to weddings for three hours and then leave. At an adventure wedding, you can make a weekend event of your wedding,” Gary said.

The Bartels see eXplore Brown County and adventure tourism sites like it as being a promising prospect for the future of Brown County.
Gary is continually working to encourage collaboration among businesses in the area. For instance, he refers to the four sets of mountain bike trails in the county, (eXplore Brown County, Nebo Ride, Gnawbone Camp, and Brown County State Park) as the “Fantastic Four” and sees them as creating a bigger draw for tourists together than they would otherwise.

Likewise, he sees the fact that there is another zip line outfit (Rawhide Ranch) in the county as an asset. “There are people who want to zip every zip line around, so they’re going to come back and do the other one,” he said.

Never ones to rest on their laurels, the Bartels are also working on a new feature called the Super Hero Zip, which is expected to be ready in October. “It will be the first of its kind in Indiana; you zip in the flying position of Superman,” Patricia said.
Visit their website <www.explorebrowncounty.com> for more information or call (812) 988-7750.
Better get your courage up.