photos provided by Steve Miller
above by Frank Hohenberger

When childhood days became long for Nashville resident, Steve Miller, his mother would sometimes tell him, “Go and watch Grandpa paint.” Running through the orchard to the studio on North Johnson Street, Steve’s senses would take it all in: the smell of oil paint and gum turpentine for the nose, color and texture for the eye; and the empty canvas quickly layered with the “opalescent” blue haze over the Brown County landscape under his grandfather’s palette knife. Steve knew the studios and gardens of the early Brown County artists—people with authentic devotion to all things handmade—music, food, gardens, pottery, and the lovely paintings of seasonal light and shadows placed in self-made frames of native yellow poplar. They were a people who loved Brown County and actively pursued the preservation of its essence before it was lost by industrial society. 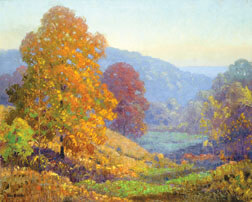 “Evening in the Hills,” by Dale Bessire.

“Grandpa” was Dale Bessire, one of the original impressionists that made Brown County an historic art colony. He was a passionately creative man who worked spring to fall in the apple orchard that supported his family, yet finding time to paint in his studio, play piano, and create beautiful gardens. He was equally of the artist colony and the local farming community. Steve says today, “I can still see all the apple trees loaded with red and yellow delicious apples, the packing shed, the cider press, and the apple sales shed along 135 just north of Nashville.”

Dale Philip Bessire was born in Columbus, Ohio on May 14, 1892. His art teacher at Shortridge High School, Indianapolis, Rhoda Selleck, supported his artistic talents. His excellent artistic contribution to the school yearbook led to him being named art editor the following year. Bessire and Harry Dietz, editor of the annual, were so determined to make it a piece of art, that they often spent the night in the office of the school newspaper, Echo, instead of going home. The annual received national praise.

Bessire’s father, J.P. Bessire, wanted him to go into business, not art. It is understandable since Dale was the only son. The senior Bessire and his brothers were from Switzerland and had industriously begun a baking supply business in Indianapolis, helping invent a mold for the mass production of the first cake ice cream cones that were a big hit at the 1904 World Fair in St. Louis. So a compromise between father and son led to Dale to a two-year business course at the University of Chicago (where art classes were his real passion). He then entered the family business for a number of years while also attending classes at the John Herron Art Institute.

In 1910, Dale walked from Indianapolis to Brown County with his friend Ralph Sickles. He had learned of its seasonal and natural beauty and knew of the artists gathering there. He found a 30 acre apple orchard for sale just north of Nashville and soon found a way to buy the orchard and move with his wife, Ruth, and their son, Philip to their new home. He and Ruth had a daughter, Marianne (Steve’s mother), and another son, Bill. “My work in the orchard gives me several months of the year to paint,” he is quoted as saying, “and also provides a change of occupation, which I believe is essential with most people to do their best creative work.” 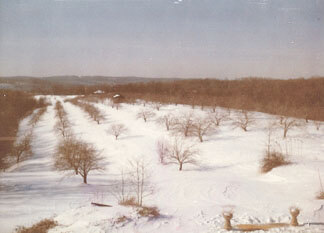 When the first Hoosier Salon was held in Chicago, 1924, Bessire was one of the exhibitors and did so many years to follow. He was an honorary member of the Indiana Artists Club, a member of Hoosier Salon, Hoosier Salon Patrons Association, the Chicago Galleries Association, and the Florida Federated Art Clubs. A charter member of the Brown County Art Gallery Association from 1926–1953, he served as secretary/treasurer 1926–1948; president from 1934–1936, and again in 1944. He was a charter member of the Brown County Art Guild and was active with the organization from 1954–1974.
Dale Bessire was able to paint year-round when his two sons were old enough to help with the orchards. Both went to Indiana University and decided to stay in Brown County. Marianne Bessire married Maurice “Pods” Miller, who along with his father owned Millers Drug Store where the Hobnob Restaurant now resides. They had four children: John, Susie, Steve, and Marilyn.

In 1962, Steve went to Cincinnati to study architecture, staying till 1971. Back in Brown County, Steve flourished in the arts and crafts revival movement of the 1970s. Some of his design work and collaboration with local artisans in Nashville includes the Art Guild, Calvin Place complex, the Artist Colony Inn, the Nashville United Methodist Church, Coachlight Square, and the Cornerstone Inn.
Grandpa Dale died in 1978 and in 1982, Steve and his artist wife, Anne, moved to the old home with the studio and gardens. You can see the old orchard property along St. Rd. 135 across from Pine Tree Hills. Bessire’s old painting studio now is used by Anne, who works in stained glass with metal overlays. John became a marine biology professor at North Carolina State University. Susie Roush, a teacher and counselor, and Marilyn Rudd, artist and originator of the Hobnob, have families and still make Brown County their home.

Steve is grateful that his impressionable years in Brown County have stayed deep in his core. He can sense now as an adult the same passion and wonder of the art colony’s painters—how they wanted to create the beauty they felt walking along a creek and valley filled with wild flowers and magnificent trees, the variety of birds and animals, and seeing the natural world changing with the seasons. Each day brought a new inspiration.