Bill Monroe started this festival in 1975 to honor his uncle Pendleton Vandiver who took him in when his parents passed away. His uncle was a fiddler who made a living playing for dances and parties. Pen passed his love of music and repertoire of songs to his nephew Bill. In 1950 Monroe wrote and recorded “Uncle Pen”—one of his most popular songs.
“Late in the evenin’ about sundown
High on the hill and above the town
Uncle Pen played the fiddle,
oh how it would ring
You can hear it talk,
you can hear it sing” 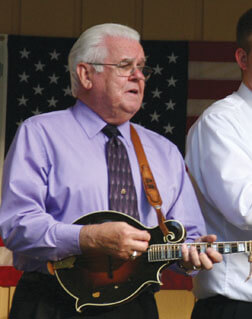 The Uncle Pen Days Festival is held with the Hall of Fame induction and is one of the longest running Bluegrass events in the country.
This year’s hall of fame is honoring Paul Williams. Paul’s career began with The Lonesome Pine Fiddlers in the 1950s. He played with Jimmy Martin’s Sunny Mountain Boys in the late 1950s and early 1960s. He wrote many successful songs with Jimmy during that time. Then he retired from the Bluegrass business but continued to write and perform gospel music. He formed the Victory Trio in 1995 and their recordings were nominated for a Grammy five years later. The group has since received many awards for their Bluegrass Gospel songs.

Be sure to bring your instrument and join in on the campground jam sessions.

Tickets are $25 for Wednesday, $30 for Thursday, and $35 apiece for Friday and Saturday or you can come for the whole four days for $105. Camping is a little extra. You can purchase tickets and make reservations at 800-414-4677 or go online at <www.BeanBlossom.us>.