Broomcorn Johnny’s is the name of a new business at 58 East Main Street in Nashville, right next to Weed Patch Music Company. Inside the sunny shop are multiple shelves holding bundles of broomcorn standing in rows much like they would in the fields where they were grown. Pegs and nails hold finished and unfinished brooms, some with the look of domestic ordinariness, others with the “brush” so beautifully variegated with colors and with handsome, smooth handles. Brian Newton, broom maker, is at work in the shop making brooms and easy conversation with visitors that stop by. The air is filled with the quiet sounds of his labor and his favorite acoustic blues tunes.

Newton is a new artisan to call Brown County home. A look back over the shoulder of memory shows the road through life that led him here. Brian was born in Beaufort, South Carolina, right outside of Parris Island where his Dad served in the Marines. He grew up in the Carolinas and Virginia, son of Gene and Carolyn Newton, along with three brothers and two sisters. When his father was away from home, his mother and the children would visit the grandparents in Indiana. When his father retired from the Marine Corps, the family lived on farmsteads in Indiana, first in Elwood, and then in Young America. Newton visited Brown County in the 1970s, which seemed so much like the beloved Appalachians. 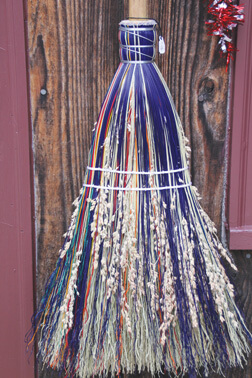 When he was 17 years old, Newton began a ten-year career as a mechanic for fighter jets in the Air Force. A noteworthy benchmark occurred in 1986, when he flew in an F16 that he had worked on as it broke the speed of sound. During his time in the service, he was overseas for seven years, seeing twenty-five countries before he was 27 years old.

In 1989, Newton went to Arizona to attend school. He also became a 32nd Degree Freemason and was Arizona’s representative to the Grand Lodge of Panama. He is also a Shriner, Knights Templar, and Past Master of a Lodge. Soaking up all possibilities, Newton had a motorcycle shop for ten years. He also was a licensed real estate agent and was President of the Board of Realtors.

Before moving back to Indiana, Newton was a salaried engineer working on clean sheet design machines used to manufacture medical devices. He raised his family and today his daughter, Sabrina, lives in Seattle, Washington, working for the American Cancer Society. His son, Nick, is an aerospace machinist in Phoenix, Arizona. He has a granddaughter, Kaiya, and a grandson, Maddix. When Newton’s father died a few years ago, he felt the pull to come home to Indiana to be close to his mother and other family.
Back in Hoosier country, Newton purchased broom making machines that were made sometime between 1878 and 1903, according to dates on some of the castings. His “broom press” is used to flatten and securely hold the broom for stitching; while his “kick winder” is used by the operator to step, or kick, to actuate the turning of the broom handle.

Newton started growing his own broomcorn, a wonderful sorghum plant that has an interesting story of how it came to the United States. It is said that Benjamin Franklin himself found a small seed on a whisk broom that was brought from France and given to him to dust his beaver hat. Franklin planted the small seed found on the brush of the whisk broom the following spring. It grew into a tall corn-like plant with stiff flowering, seed-bearing brush. From this initial experiment, the broomcorn was a gardening novelty in Philadelphia. Then in 1797, a man who had raised half an acre of the broomcorn began to make and peddle brooms. Skilled workmen began to produce the improved brooms and it became an important industry, providing housewives help with sweeping and dusting floors and cobwebs.

Many people remember the Cullum Broom and Mop Company in Helmsburg, so it is good to have a broom making operation back in Brown County. A couple months ago, Newton won second place in a national Craft Broom Contest. Custom brooms with choice of brush colors and handles are available, along with whisk brooms, household floor brooms, “cake-testers,” hand-sized table-sweepers for crumbs, and cobweb brooms.

And how did the shop get its name? Newton tells how broomcorn harvesting requires a lot of hand labor. The man who did this specialized work was known as the “Johnny.”