Most people enjoy listening to music but, as any musician will tell you, the greatest pleasure comes from the playing of music. That’s how Otis Todd has spent his days—not seeking the stage, but playing in the company of family and friends. Now 82, Otis hosts a weekly jam in his garage, where folks meet to pick everything from country standards to traditional mountain tunes.

Todd grew up in Heltonville in a small house with a large family. “There were fifteen of us,” he says quietly. “Living room, bedroom, kitchen, and an upstairs loft.” 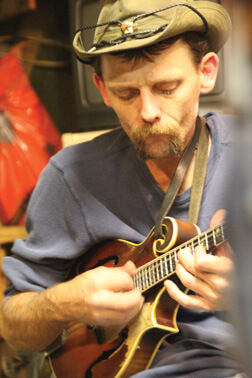 “Otis is from a different time,” his nephew, Barry Elkins, observes. “He’s from the Depression era. If you were lucky somebody had a radio, but they pretty much entertained themselves”

On this night, as his huge wood stove cranks out enough heat to fill Assembly Hall, Otis gets out the Gibson guitar he’s been playing for over 60 years and launches into the Hank Williams classic, A Picture from Life’s Other Side.

“As long as I have come down here to pick with Otis there isn’t a week goes by when he doesn’t pull a song out of nowhere that I’ve never heard before,” says Dan Bilger. “He’s got a treasure trove of songs.”

More people arrive, unpacking guitars, mandolins, a dobro, fiddle, and even an upright bass. Otis plays the opening chords of Release Me and soon everyone is following along.

“I moved right down the road here in 19 and 53,” Otis said earlier. “My first wife was from Brown County right down the road here.”
Todd was living in Columbus and working at Hamilton Cosco at the time. “I quit Cosco in ’67. Then I was a maintenance man running here and there and everywhere. Anything tore up I fixed it or tried to—chain saws, weed eaters, and everything like that.”

He worked at REMC until 1992 but retirement didn’t sit well with him so he started paving asphalt for his son Jack, which he was still doing as of late last summer. “I did work up to the second of August and then it got too hot,” he laughs.

“We’ve been trying for a long time to get him in the studio, have him sit down and just let the tape roll,” Elkins says, “but it’s hard to get him over there. Now that he’s retired—or semi-retired—I’d like to get him there, because he ain’t getting any younger.”

As he circulates amongst the players Otis is clearly enjoying the evening, much like the old days when he’d just show up at the Pine Room Tavern with his guitar when he felt like playing.

“He’s been going to Bean Blossom since before the Monroe Park,” says Barry Elkins. “Every Saturday night the whole community would get together at a garage at the intersection of 135 and 45. They put a piece of plywood on the car lift and the band would get up on that. They’d have square dances and everybody in the whole community would come around.” 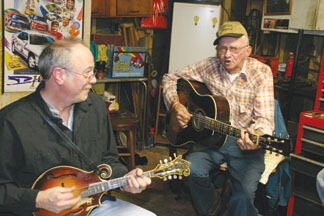 It was a scene much like the one in his garage tonight. “There has always been a crowd here,” says Dan Bilger. “You might get ten or fifteen pickers.”

“I’ve seen forty people here in the summer when the garage doors are open,” adds Richard Gist. “He’s had people come by who are staying nearby on vacation and have just heard about it.”

“Being around him as a kid,” Barry remembers, “they were playing all the time—he and his brother. When his brother died Otis kinda put his guitar in the closet and quit. When I started getting into flat picking and fiddle tunes and bluegrass and whatnot he started back up again. I’ve learned a lot from him. He wants to pass it on, I think, while he can.”

“When Barry came down here I wanted to give him my old mandolin to learn on it,” Otis says of why he began playing again.

“Sean Harris and I used to go down to Otis’s just to pick his brain and try to learn some of his songs—he’s forgotten more then I’ll ever know,” Elkins laughs. “We were just trying to learn those old songs. People started coming around and before you know it there were twenty people here every Thursday night.”

Tonight, musicians pass songs around until everybody has had their way with them. “You can get involved if you want,” Barry says. “If you’re not comfortable with the circle you can sit back and play along. The more comfortable you get, you can step up and take your round. We’ve got people who are really good and people who are beginners. That’s what’s cool about it. We try to make everybody feel welcome, everybody feel a part of it.

“Otis is like a hero but he doesn’t even know it,” Elkins continues. “He’s so humble and modest…. Anytime we’re playing out somewhere I try to get him up on stage. Sometimes he’s shy but I give him a little bit of encouragement—”Come on, get your guitar and get up here!”