Skip to content
We Got It! The Cultural District Designation 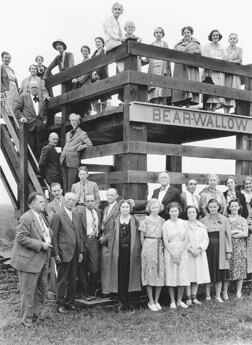 We Got It!
The State’s Cultural District Designation

The town of Nashville found itself in select company in December when it was awarded a State Cultural District designation by the Indiana Arts Commission.

There are only five such designations in the entire state, and three of them are on the Highway 46 corridor—Nashville, Columbus (which also won designation in December) and Bloomington, which was awarded the designation a few years ago in the first round of applicants. The only others in the state are Carmel and Tippecanoe.
Currently there is no funding associated with the Cultural District designation, but benefits include increased tourism marketing and economic activities that come with being part of a branded program with state-wide emphasis.

This was the latest step by the town of Nashville to market itself as a unique arts and entertainment community.

Also earlier in the year, the Town Council, in another ordinance, created the Nashville Arts and Entertainment Commission, whose duties include encouraging, assisting, advising, and coordinating the district.

The nine-member commission, which began meeting in October, is chaired by Tom Tuley, a Brown County artist and retired newspaper editor (Evansville). Vice-president is Jan Spears, who has taught dance in Brown County for many years, and secretary is Jane Ellis, executive director of the Brown County Convention and Visitors Bureau. Treasurer is Dixie Ferrer, who, along with her husband Dick, operates Ferrer Gallery in the district.

Other Commission members are artist Anne Ryan Miller, Kathy Anderson, Cathy Martin, Cindy Steele, and Suzannah Zody.
“The state district designation was important to us,” said Tuley. “Now, not only will we be marketing ourselves as an arts and entertainment community, but the state will be marketing for us too. This should lead to an expansion of economic development, which is really what this whole effort is about.”

The commission has already researched how similar commissions in similar communities operate, and is currently working on a mission statement, logo, branding, a marketing plan, and guidelines for public art projects. “One pad for a new piece of public art has already been placed on Franklin Street near Jefferson and as soon as guidelines are completed efforts will begin to acquire a piece for that pad,” Tuley said.

Sometime after the first of the year the commission plans to hold a public meeting to update the community on where it is and begin the process of gathering information on the needs of artists and entertainers. That information will be vital to a long-range plan moving the district forward.

The commission meets at 9 a.m. on the second Thursday of each month at the Nashville Town Hall. All meetings are open to the public.