They say that in the restaurant business, as with real estate, the three key considerations are always, “location, location, location…”.
So when a well-established restaurant like Casa del Sol makes a move from its familiar position on 46 West and Parkview to more well-appointed quarters in town, one wonders how it will fare.

Accordingly, I gathered up my kitchen companion and made my way down to the Camelot Square complex on the south end of town, where the county’s only ethnic eatery is now located in the large, modern restaurant on the east end of Washington street.
Casa del Sol’s traditional Mexican cuisine has been a local favorite for years and the funky re-purposed building (it was built as a greenhouse and garden supply years ago) only seemed to add to its charm.

The new Casa del Sol is spacious and clean and has been decorated with south-of-the-border themed frescos similar to the ones seen in the courtyard at the old location; a little touch of the old in the new.
The service has always been excellent, and this has not been altered by relocation. We were promptly greeted, seated and served up with complimentary chips and salsa, which I augmented with an order of cheese dip—a course of action I highly recommend.

While perusing the menu options, perhaps it would be good for us to have a short discussion about methods.

Sure, I suppose technically, scientifically, I should probably order each thing on the menu and taste it, grade it on a rigorous twelve-point scale and enter it into the massive mental database of comparison with all other restaurants I’ve ever encountered both real and imagined.

I should, but I know I’m not going to.

The fact is, Mrs. Sampler and I eat there all the time.
I can look at the menu for ten or fifteen minutes, however long you want, but in the end, when the server comes, my wife knows and I know, I’m going to order the Fajitas Monterey. 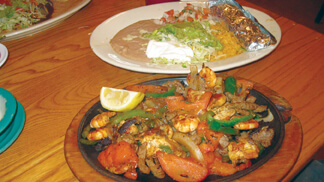 Oh, at various times over the years, I have eaten my share of burritos, enchiladas, the occasional order of pork carnitas along the way, but when it comes right down to it, I have become inescapably infatuated with that delicious sizzling skillet of meat and onions and peppers with its affable companion plate loaded up with beans, rice, shredded lettuce, pico de gayo, sour cream, and guacamole.

I already know full well that is what I want and must have.
Mrs. Sampler studies the menu like it’s the long form tax return, suggesting this and that, throwing various feints and fakes. I know that she will pick the Chimichanga. She loves Chimichangas, those tortillas stuffed with chicken or beef or shrimp and deep fried to a golden brown They are delicious here, served with rice and beans, lettuce, sour cream, pico de gallo, and guacamole.

“The Chimichangas look good,” she says casually, studying the menu offerings like a railbird with a racing form.
Huh.

But I musn’t suggest it, because in my experience, Mrs. Sampler also never orders a menu item I suggest first, and I don’t want to spoil it for her in case that’s what she really wanted.

She pretends to look at the fajitas, but I know that years of watching me consume them has more or less put her off of this delightful offering. The fajitas platter comes with little soft tortillas and you make your own little mini- burrito.

I hoped she would order the Chili Rellenas Cena; a poblano pepper stuffed with Chihuahua cheese, lightly battered and deep fried, topped with red sauce and served with beans and rice. I have heard it is scrumptous.

In the end, she settled on the Enchilada Supremas, a beef, chicken, cheese and bean enchilada topped with red sauce, shredded cheese, lettuce, tomato and sour cream.

There’s also the option of combination dinners in almost every stripe, so that one could order a burrito, enchilada and tamale (a number six) or an enchilada, chalupa and taco (a number twelve), or even vegetarian combo dinners of diverse descriptions.

And the taco salad is also good. I’ve heard the shrimp tacos are worth a bite.

The fajitas arrive with a majestic steaming-hot presence; peppers and onions and tomatoes and beef and chicken and shrimp all sizzling on a steaming skillet born aloft on a wooden trencher—there’s something primal and awe-inspiring about this steaming heap of goodness. The smell of it is nearly enough to satisfy.

As we contentedly munched away at our copious and delectable dinners, when I reached across and sampled some of my partner’s plate, it began to dawn on me that everything on the menu was pretty darned good, and no matter what had arrived, I would have undoubtedly, in the end, been just as profoundly satisfied.

The hardest part is making up your mind what to order.

And by the way, you can order adult beverages at the new location.