If her “gone fishing” sign is up on the door and the weather is fair, you know Sally Baldwin is most likely mushroom hunting or gardening, two of the hobbies that have supplemented her passion for weaving in the 25 years she has owned Brown County Weavery in Nashville.
“In the spring I get up really early, tend to my animals, work in my garden, and hunt mushrooms in the woods and wild plants to dye with,” Baldwin said.

Around noon she settles into her shop on Franklin Street, where she weaves, sells her wares, visits with old friends, and chats with new visitors.

Just as do-it-yourself projects are popular now, so they were in the early seventies when Baldwin was a young wife and mother of two. She discovered a passion for weaving after taking a class at a YWCA in St. Paul, Minnesota in 1973.

“I was part of the back to the land movement and my idea was that I was going to weave all of our clothing,” she said, laughing.
Since money was tight, she started by weaving rag rugs from materials she could get cheaply or for free.

“New looms are expensive and yarn can be pretty expensive. I got a used loom and couldn’t really afford to buy new yarn, so I did rag rug weaving,” said Baldwin, who found she could make a rug out of a 25 cent chenille bedspread from the thrift store.

Sally still does some rag weaving today; at present she is making a set of area rugs for a customer who is supplying her with balls of old denim fabric.

“That’s how it used to be done; people would tear up their rags and roll them into a ball and give them to the rug weaver. That was before it was fashionable, it was out of necessity,” Sally said.

In the late seventies Baldwin, who is originally from Evansville, got a wholesale order for some of her rag rugs from the Country Mouse Weaving Studio. When she came to town to drop them off she was smitten and wanted to stay.

“I loved it! And my husband loved it too, so that was good. We moved two months later,” said Baldwin, who got a job at the weaving shop.
In 1988, Sally opened up Brown County Weavery in collaboration with a friend who wove clothing. Soon she began learning to weave clothes, too, favoring classic designs that show off the quality of the weaving.

“When I weave clothing, I don’t want to cut into the fabric very much, so I tend to make very traditional pieces, like capes and wraps and shawls,” she said.

In recent years she has been creating pieces that are as elemental and sustainably sourced as possible, using wool from her angora goats, Rumi and Layla, and making dyes from plants she finds in the woods. “The pieces I’m most proud of are the ones where I’ve used natural dyes, organic cotton, wool, or mohair from my goats. A lot of people seem to connect with those pieces because they know I’ve started from scratch,” Baldwin said. 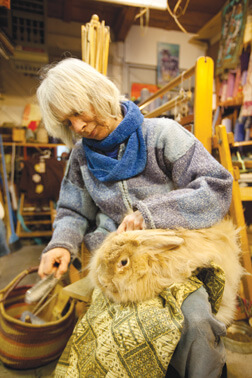 It’s difficult to attain the brilliant colors of synthetic yarns using natural dyes, so Baldwin keeps creating products from both. “It’s hard to make the switch to using completely natural yarns instead of rayon or acrylic yarns,” Sally said, adding that the all-natural pieces are typically a bit more expensive.

For several years Baldwin had a shop called Roots, which sold fair trade goods from South America, India, and beyond. Today she carries similar items at the Brown County Weavery, although she would like to transition to more locally-made products.

“I would like to find more local artisans that produce some of the things I buy from India and other countries. That’s hard to find,” Sally said.

Lately Baldwin has been thinking about selling more gardening and nature-related products at her shop, as well as natural healing products. She also plans to start offering classes in her shop, teaching the things she knows best, like spinning, natural dying, and basket making.

“It’s kind of hard to teach weaving here because I’ve only got two looms,” she said, who has passed on the skill to various employees over the years, as well as her two grandchildren, who are seven and nine.

As her shop’s 25th anniversary rolls around on April 1st, Sally continues to do what she loves best—weaving and spinning clothing that people keep people warm, experimenting with new techniques and designs, and spending time in nature. And it’s still a pleasure when someone appreciates something she’s created herself.
“I always get excited when I sell something I’ve spun,” she said.
Brown County Weavery is at the corner of Jefferson and Franklin streets in Nashville’s Antique Alley. Sally can be reached at (812) 988-0340 and <browncountyweavery@live.com>.