Spring is in the air again. The elusive morel mushroom has mushroom hunters gathering for a two-day music and morel festival in Southern Indiana.

The Simply Music, Simply Mushrooms-Morel Festival will be held at the Bill Monroe Bluegrass Hall of Fame and Campgrounds on April 19 and 20.

“The festival is the very first of its kind in the world,” says Randy LaVere, festival organizer and co-owner of Eden Outfitters. “It will be a great event and quite possibly the largest gathering of morel hunters ever.”

Brown County, Indiana is well-known for its abundance of morel mushrooms. Over 90 percent of the county is covered in forestry making it one of the hot spots for mushroom hunters. Morels are the first wild mushrooms to appear in the spring. They are in the Morchella genus and are easily identifiable by their honeycomb shaped top. To many, they are a highly regarded edible spring fungi. Morels are also called “shrooms,” yellers, sponges, dry land fish, and sometimes merkels.

“Though not known to contain any chemical that is addictive, there’s something about these spongy fungi that will have you taking time off of work in early spring to get out and find more,” LaVere says. “Morels have been known to cause people to pull off of the road and jump out of cars racing towards what they thought they saw.”
For some, morel hunting is a family tradition. LaVere, along with his wife Kristin (co-owner of Eden Outfitters) and children Elijah and Willow, are very involved in planning the festival and designing t-shirts for the event. He has many stories that have been passed down through generations about morel hunting and cherished times spent in the woods with family.

“My favorite experience mushroom hunting came when my son was three years old,” he says. “I’ve been taking him into the woods since he could walk. We were at one of our spots and I was trying to show him what to look for. Not really having much luck, all of a sudden I turn around and he’s holding up a tiny morel saying, ‘Look what I found, Daddy.’ I had walked right past it.”

The Simply Music, Simply Mushrooms-Morel Festival will include six classes and four guided morel hunts (forays) for every skill level. Some of the classes offered are tree identification, morel preparation and morel hunting basics. Certified morel expert Stephen Russell, owner of the Hoosier Mushroom Company, author of “Homegrown Mushrooms” and founder of the Hoosier Mushroom Society, will be on hand to offer advice and share secrets for successful hunts. Tom Nauman of Morel Mania and other mushroom experts will also be available for discussions and tips on morel hunting.

“We definitely recommend bringing you best cold weather gear and dress in layers,” LaVere advises. “It has been known to rain here during April, and wet weather gear will make your trip more enjoyable. Whenever morel hunting, it is always best to have a mesh bag of some sort to allow the spores to spread while you are hunting.”

Along with mushroom hunting, on the Eden Outfitters Main Stage will be a mix of Folk, Americana, Singer-Songwriter, Bluegrass, and Newgrass music. On the stage will be world-class music from 15 bands, including Indiana Boys, Rick Cox and the Cox Brothers, Chicago Farmer, Megan Maudlin, Hazelwood String Band, Old Truck Revival, White Lightning Boys, Lexi Len Minnich, and Landon Keller. The music festival officially ends on Saturday evening, but the first annual Indiana State Morel Hunting Championship will be held Sunday on 80 acres of private land in Brown County. 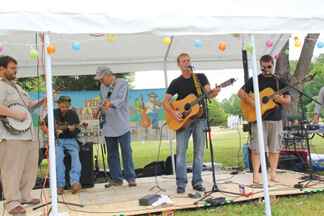 Outdoor clothing and equipment vendors will carry all the essential morel hunting gear, including apparel and supplies for the serious hunter, and camping is available on location. Reservations can be made by contacting the campground at (812) 988-6412. The park also has a limited number of cabins for rent on site for the festival.
“We are encouraging all locals to come out on Thursday night April 18 at 7:30 p.m. for a free pre-fest party under the pavilion with the Indiana Boys,” LaVere adds.

Whether you are a novice or a seasoned morel mushroom hunter, the Simply Music, Simply Mushrooms-Morel Festival will be a weekend of fun, music, and celebration with friends and family.

For more information on the event, visit their website at <www.morelfestival.com> or call them at (812) 988-8800. Tickets can be purchased online at <www.shop.morelfestival.com>, or in person at The Pine Room Tavern or Muddy Boots Café.