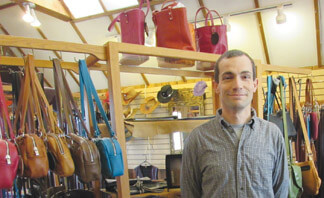 When high school senior Mike Kline worked as an apprentice for Bill Dillon, owner of a leather shop in Nashville, he never imagined one day he would own the shop and become a successful entrepreneur.
“Bill told me he was closed from January to March, but gave me a book on leatherworking,” Kline says. “He told me to read it and come back in March and we would talk. I read the whole book.”

He came back in March and spent the next few years working alongside Dillon and becoming a master craftsman. Kline bought the shop when Dillon retired in 1992. After 22 years in business, Kline owns three stores in two states, has distributors in Japan and South Korea, and employs over 20 people.

Kline and his wife Missy opened the original shop in Antique Alley. In the early days, their older children helped in the shop. The family and employees take pride in the quality leather goods produced. Kline says, “We don’t use computer-driven machines or other mass manufacturing techniques. We use the talents of our skilled artisans—one artisan, one machine.”

In 2005, Kline was on the road marketing his leather goods and was captivated with the landscape of Arizona. “I was doing art shows in Arizona and saw a sign in a store window that said, ‘For Rent,’” he explains. “I liked the area and decided to open a leather shop there.”

Altai Leather Designs was opened shortly after his trip out west. The shop carries the same leather products sold in the Nashville store. After their youngest (the couple have five children, ages 8 to 20) started school, his wife took over management of the Arizona store. Kline continues to travel monthly to the store out west. On weekends, all of the children help out making smaller items for the company.

“I make all the kids work,” he smiles. “My oldest son is the most experienced belt maker.”

A lot of his customers are repeat ones. Throughout the year, tourists and locals visit the shop. But Kline also sees international shoppers here for American made items. Several years ago, Kline took Japanese lessons from Mikiko Kory, a customer and Japanese teacher.
“I had so many Japanese speaking customers that worked at Cummins, I decided to learn the language,” he explains. “When they came to visit Nashville, they were looking for something made in America. I wanted to be able to help them. We still get a lot of foreign customers looking for quality items.”

Kory became co-owner at K. Bellum, the second Nashville store located in the original leather shop on Franklin Street. The second store carries a line of leather goods made by artisans from Kentucky, Pennsylvania, and Ohio. They also carry some of the leather goods sold at the store in Nashville.

Moonshine Leather products are also popular throughout Asia. Kline has two distributors of his leather goods in Seoul and Tokyo.

A few years ago, Sunho You approached Kline to carry his products in her boutique in Seoul. While studying at Indiana University she visited his shop many times. After graduation, she returned to Korea and opened a store carrying original items.

Upstairs in the loft at the shop on Van Buren are recycled firemen’s gear and leather items. “Black Helmet approached me in 2011 to design a line of wallets using recycled firemen’s bunker gear and leather,” Kline says. Black Helmet is based in Miami and was founded by a fireman, for firefighters. All the designs are hand-drawn, and a portion of the proceeds go to support charitable organizations.

Customers return to find quality goods from a local vendor.
“We still have customers that bought from the previous owner,” Kline says. “That’s 30 some years of customers. It’s kind of fun to see a new generation of customers buying gifts from the shop.”

Stop by Moonshine Leather Co. at 35 Van Buren Street in downtown Nashville next to the Hobnob Corner Restaurant and visit K. Bellum located at 92 West Franklin Street (1 block south of Main Street in Antique Alley). If visiting Jerome (near the Grand Canyon), Arizona, stop by Altair Leather Designs at 415 Main Street. Visit Moonshine’s website with over 1700 different items at <www.moonshineleather.com>.