Public art has always been about making a statement, creating a space to gather, and starting a conversation.
The new towering leaf sculpture named “Soaring” in the courtyard next to the Visitors Center at the heart of downtown Nashville is not only a calling card for a town built on the annual nature show of autumn leaves, it makes a statement about the value of art to heal and to inform—of cooperation between artists, various community interests, and wounded warriors.

The sculpture is the product of a non-profit group called Elder Heart which empowers veterans through the experience of creating public, private, and corporate art. Elder Heart, the brainchild of Magnus Johnson, a Green Beret veteran of Afghanistan and Iraq, seeks to build awareness about veterans’ concerns such as the high number of suicides and VA backlogs. 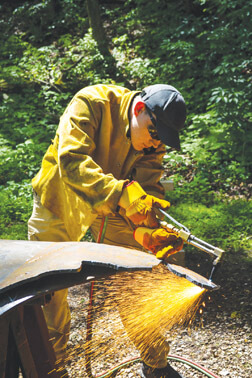 The giant leaf sculpture was facilitated by Brown County sculptor and metal artist Jim Connor. Johnson and Connor had spent some time together making art pieces.

“Magnus and I had been talking about doing a veteran art program, and I had heard in town that there was kind of a concept for a sculpture,” Connor said.

The marketing company Three Sixty Group came up with the idea of a landmark leaf sculpture for the Nashville Arts and Entertainment Commission. At the same time, Elder Heart was approaching the commission to let them know they were interested in working on a major piece for the county.

Connor said, “It was just an idea, but we grabbed hold of it, because we thought leaves and Brown County is a really good fit.”

The project involved building a consensus among town leaders and other interested parties. 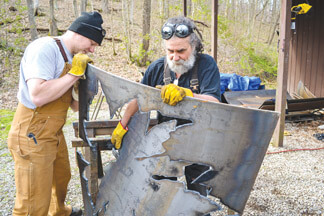 “Brown County has a rich history. People live here because they want to be here— because it’s beautiful, because it’s different, because it’s special. There are a lot of elected officials, committees, and groups that are ambassadors for that. They were worried about all these different things, so it was more of a process than I would’ve liked—but not negative,” said Johnson. “There’s been a couple of sidetracks, but some men and women, almost from nothing, created this huge social-impact art piece.

The 15-foot tower of giant, interlocked maple leaves is made of solid half inch and three-eighths inch thick A36 structural steel donated by the Kroot Corporation of Columbus. Local mural painter Larry Webb is offering his skills to color the leaves with automotive paint.

The plates for the biggest leaves at the base of the installation were cut out from 720-pound pieces. All of the steel plates were trucked to a plate-rolling facility in Indianapolis to be curved and hauled back to Brown County to be cut into leaf shapes.

“I wanted some really nice curves in those big heavy plates in order to make it look like it was alive, to make it look real,” Connor said. “The details are built up with wire-feed welding. We laid those out and just used a decorative weld to build up the veins.”

Johnson praised Connor for his choices in getting from a proposed concept to a finished piece.

“That sculpture is alive,” he said. “It’s got space. It’s got
dimension. It’s got flow. It’s heavy duty, but completely one hundred percent safe and structurally sound.”

The actual installation of the gigantic steel leaves became a sort of performance art show for locals and visitors alike as Connor and the veterans hoisted the leaves into place with a crane and then clambered around on the sculpture grinding, spot welding, and doing touch-ups.

About 20 veterans from the wars in Iraq and Afghanistan, Vietnam, and WWII helped to create the sculpture.
“We’ve had some really emotional moments on that thing,” Connor said. “There was a Vietnam veteran who came and welded on it. Sometimes these vets come, they don’t really know one another, but once they meet, they can share their experiences. Ultimately, it’s a healing experience for them.”

“Part of the problem is they want to engage and people don’t know what to say to them,” Johnson said. “It’s not like, ‘if you do art you’ll be healed miraculously.’ But for some guys, just doing some art and focusing on something simple is valuable.”

He said the healing goes beyond the veterans to everyday people who see the sculpture. “You draw people in with the art piece, and once they’re there, you can give them the message that you’re trying to get across,” Connor said. “We’re not trying to build war monuments, we’re trying to raise awareness and we’re trying to build beautiful things that are positive.”

Johnson said this is the first of what he hopes are many large-scale, social impact projects Elder Heart will be known for.

“I’m going to Cincinnati to meet with some different people who are associated with public art in Cincinnati,” he said. “They’re looking at the news and the photos of everything we’re doing here in Indiana and they are inspired.”

“This was our kickoff,” he said. “Our ultimate goal is to put these all across the country. The idea is for us to be able to go out to other communities and show them how they can go about teaming up their artists and veterans together to do projects on their own—what their community needs.”

“War is a really difficult thing,” Johnson said. “A lot of people have a lot of opinions, and they’re entitled to that opinion. But what we’ve got to do as a community and a nation is to honor the warriors and veterans who do serve for this country.”

To learn more about Elder Heart or contribute to their cause visit <elderheart.org>.