Looking Back at Hilltop Girls Camp and Summer School

“There isn’t any really right order for telling the story of a camp. It takes everything together to make it come out right and be a true story.” wrote Katherine McAfee Parker, in a promotional Hilltop Camp booklet in 1938. So, let’s begin with the setting.

There were no trees on Town Hill in the 1920s. From the top of the hill you could look out across the town and beyond. There were fewer than 500 people living in town. Most Brown Countians still travelled by horse and wagon. The now-famed artists would picnic on the hill at the Vawter cabin. Hohenberger roamed with his camera.
In 1924, a progressive, determined, and well-educated woman, Kate Andrews, opened the very first summer camp in Brown County on 20 acres at the top of Town Hill. Most astonishingly, it was a girls’ camp, accredited by the state board of education. It was officially named Hilltop Camp and Summer School for Girls.

Girls could elect to do advanced or remedial academic work while enjoying their Brown County summer. As Marianne Bessire Miller, whose association with the camp began in 1927 and totaled 13 or more years, observed in a speech to the Brown County Historical Society some years ago, “It was more cultural than recreational.”

Kate Andrews spent her girlhood in Seymour, Indiana. She graduated from Wellesley College, a prestigious private women’s college, and did graduate work at Chicago and Colombia Universities, as well as in Europe. She taught for seven years at Western College in Oxford, Ohio, was the principal of the Seymour High School for 15 years, and served nine years as Dean of Women at Hanover College. 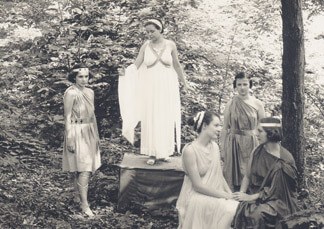 A summer play. Marianne Bessire is standing on the platform. Frank Hohenberger.

While summer camping is now well-established in the county, in 1924 the entire US camping movement was relatively new. Camps for girls did not appear until the early twentieth century. Opening a girls’ camp was a pioneering adventure in Indiana at that time.

The girls lived in log-cabins. At least two were moved from Weed Patch Hill in the Brown County State Park. The cabins were named and included: Skyline, Bluebird, Wren (or Wrens Nest), Lookout, Rush, Hoot Owl, Chipmunk, Pee Wee, Wood Thrush, Valley View., and Whippoorwill. Whippoorwill, the cabin nearest the stage, was not only home to the art director, but also costume shop, property box and green room. Skyline, Kate Andrews and later Musette Stoddard’s home, was razed and replaced by a modern home in the 1960s. All the other cabins remain.

Camp lasted a full two months. Campers could elect one of two four-week sessions, or stay the entire summer. In 1938, the full two months cost $135. One month was $75. The girls rose at 6:30 a.m. and went to bed at 8:00 or 9:00 p.m. depending on their age. Campers ranged in age from six to twenty when the camp was in full operation.

Over time, the facilities grew to include an outdoor theater, tennis courts, swings and see saws, and trails. Activities included horseback riding, archery, dancing class (tap, balllet, and ballroom), and Sunday morning services in the outdoor theater. Kamp Kapers, the camp newspaper, was written by the girls.

By far, the most important activities were art and theater.
Art classes met in the morning. Art activities included pottery, ceramics, loom weaving on different styles of looms, and tooled leather—not just lacing, but designing and lining. Musette Stoddard, the art director, had a china kiln in her basement. Walter Griffiths, of the now-historic Brown County Pottery, would fire the pottery.

“It would take a big museum to hold all the things they have made in the art department,” Parker wrote in 1938, detailing the output of one 12-year-old camper: a blue chenille rug with orange and lavender stripes, two green bowls, a sandwich tray, a green wall pocket, two pattern weave mats, an English tapestry with a design of mountains and trees with a lovely lady in blue and orange, and a decorated handkerchief box.

It would take at least ten weeks giving a play every day except Sunday to give all the plays over again,” Parker concluded.

During the two months of camp, they put on at least four plays, on the last Saturday of each four weeks’ term. Plays mean staging and costuming and properties and lighting.“All of Nashville came to see the plays, sitting on wooden benches for a couple of hours twice a summer,” Marianne Miller recalled. “The first person in charge of the theater was Mr. B. [Arthur J. Beriault] He recited a whole Shakespeare play in an evening, taking all the parts. And we were just entranced.”

The annual party at Skyline was “the” party of the year, according to Parker. Marianne Miller recalled that it was always a costume party. Since campers made all the costumes for the plays, there were always old costumes available.

In 1937 it was an artists’ party when everyone went dressed as a well known artist. The lawn was decorated with Japanese lanterns. There were stunts, prizes, and delicious refreshments. “The main and best stunt of the evening,” according to Kamp Kapers, “was presented by Dale Bessire, famous Brown County artist (and, at Hilltop, famous as Marianne’s father) who did an oil painting to show ‘one night artists’ how he did it.”

In 1933, Andrews added the 80 acres of the Linke farm, with its farmhouse, barn, pasture land, and meadow, to add a boys’ camp.

She apparently cared for an ailing sister for many years, postponing marriage until after her sister’s death. She married Thomas J. Weaver in 1935. She then wintered in Chicago and led the camp in Brown County, until her own illness brought an end to her association with the camp. She closed the camp during at least one year of World War II. Later in the 1940s, Musette Stoddard, the art director, tried to carry on for a few more years, but the camp closed permanently in 1947, victim to the loss of its leader and to changing times. The land was sold, and developed.

But Hilltop can be remembered as “a hilltop of joy indeed—joy of living in cabins with counselors and girls, joy of making things, of acting in plays, joy of swimming and sports and dancing, joy of singing, joy of learning the loveliness of woods and fields, joy of being alive in Brown County.”

Thanks to Kara Barnard, owner of one of the Hilltop camp cabins, and to Steve Miller, son of Marianne Bessire Miller.