Mythology has stories of the great mother of all, the personification of mother earth herself, and her name is Gaia. It is a nickname given to Paula White by friends who know her best. Gaia’s Touch is a fitting name for the business where she provides services as a Certified Massage Therapist, Reiki Master, Certified Nutritional Herbalist, and Intuitive Reader. She has been offering these alternative therapies to Brown County residents and those who visit the area since 1997.

Gaia’s Touch has been at its present location for three years. The office with massage table has a sense of calm about it, and Paula says she wants it to be a space where clients can feel comfortable and safe. A general session is one hour, with other sessions offered being half an hour, 45 minutes, and one and a half hours. She comments that children benefit from this type of therapy, their bodies being very responsive to massage work.

Paula came to Brown County in 1989 to work as a draftsman in civil engineering for Aecon. The Brown County schools provided a satisfying educational experience for her two children, Logan and Jessica. Always interested in herbal medicine and alternative therapies, Paula took a four week course in massage offered by the Lifelong Learning program in Nashville in 1997. It was taught by Linda Thomas, who noticed Paula’s talent and interests. With Thomas’s encouragement, Paula attended the Indiana School of Natural Therapies, where her studies led to certification in body reflexology and related therapies. 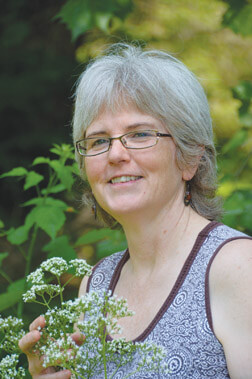 Gaia’s Touch became a full-time career in 2005. By the spring of that year she had become a Reiki Master and knew that Reiki sessions would be attractive to people who desired a lighter, more gentle touch. Reiki is described as: “An energy modality from Japan that passes healing energy from the practitioner to you.” Reiki sessions are 30 minutes, 45 minutes, or 60 minutes.
Paula received her certification as a Nutritional Herbalist from the oldest school of natural healing in the United States, The School of Natural Healing. In conjunction with her touch therapies, she has an herbal tea business called, “Grandma Mimi’s Herbal Blends.” The organic teas are sold locally at Sweetea’s and Muddy Boots, at her office, as well as on-line. This harkens back to when Paula was raising dairy goats, and the soap-making business naturally unfolded when there was a surplus of goat’s milk. Her goat’s milk soaps were sold through retail stores throughout the state and on the internet.

Paula’s first business experience came when she ran her family’s feed and farm supply business called White’s Feed and Chick Store in Milan, Indiana. It was started by her grandfather and was passed on to her father. While her father was teaching school, Paula took over operations of the store. Unfortunately, the farming crisis in the mid-1980s brought the business to an end.

Sharing her Hoosier roots and family pride, Paula said her father played on the 1954 Milan basketball team that won the Indiana State Championship. Her parents, Gene and Anita White, are now living in Franklin. Her older sister, Pam Green, is residing in Florida while younger brother, Bill White, lives in northern Kentucky. Her son, Logan Sutton, is now in New Mexico, pursuing academic research in linguistics. Her daughter, Jessica Sutton Laguna, and Jessica’s family live nearby in Nashville. Having granddaughters, Katarina and Genevieve, nearby is a special joy to Paula’s grandmotherly heart.

Gaia’s Touch is the perfect livelihood for Paula, whose genuine smile is comforting to everyone. She brings to mind the old hymn, “All Is Well with My Soul.”

She plays the fiddle and guitar. She loves crafts like spinning and then knitting the yarn that she spins. She has three cats, Possum, Smudge, and Tanner who sometime visit during sessions with the client’s invitation.

Appointments can be made for sessions at Gaia’s Touch through Facebook, email at <Paula@touchofgaia.com>, or by phone (812) 360-6879.