Skip to content
Jeff Danielson Catching it in the Camera

Jeff Danielson
Catching it in the Camera

by Laura Gleason
photo of Jeff and Drover by Cindy Steele

“Indiana might not be known for its shining seas or purple mountains’ majesty, but it has a beauty all its own,” says Jeff Danielson, nature photographer.

“We don’t have the Grand Canyon, we don’t have a lot of areas that are by themselves inherently striking and beautiful, but what we do have is a lot of interesting natural areas that become beautiful at that right moment, and it’s that moment that you have to capture,” he said.

The now-retired founder of the Runcible Spoon restaurant in downtown Bloomington slid into professional photography sideways, he said, by picking up a camera and taking pictures of things that interested him. Having started, however, he soon seized his new hobby with the vigor and enthusiasm that have characterized his career.
The way Danielson came to open the Runcible Spoon has a similarly unexpected and enthusiastic feel to it.

“I had come here from a small college to work on a PhD in classical archeology, and what I learned was that the guys I was working for here spent at least 60 percent of their time just doing fundraising, not really having the time to work in the field because they were so busy getting the money to do the work,” he said.

It wasn’t his preferred lifestyle. “I didn’t want to spend the rest of my life schmoozing for money, so I thought the next best thing would be to open my own business,” he said.
He started the Runcible Spoon in 1976. “There were nowhere nearly as many restaurants, so even with my extreme ignorance, I had enough of a cushion of time to learn enough to survive,” he said. 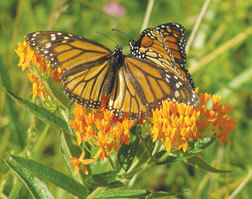 In 2001, after 25 years of running the Spoon, Danielson sold the restaurant to chef Matt O’Neill, a regular whom he felt he could trust to keep the business thriving.
Danielson had ideas for his newfound free time—his son, Ian, was leaving for college in Minnesota, and Danielson wanted to be able to go watch his soccer games (father and son share a love of the sport). He purchased his first digital camera with a telephoto lens to document Ian’s games, never imagining that photography would become more than a hobby.

He next turned the camera on the avian activity in his woodsy backyard—Danielson and his wife, D’Arcy, live a stone’s throw from the Brown County line, near state forests and Lake Monroe . He sent some of his early images to birder friends, asking them to identify the species he had seen. They told him that the pictures were good enough to sell.

His first show, in 2005, took place in the lobby of the Buskirk-Chumley theater, and after that he was on a roll. He set up a website and began marketing some of the images online. Today he has sold photographs all over the country, and even some internationally. He also participates in art shows occasionally, and his work is regularly displayed at the Ferrer Gallery in Nashville.
Danielson has expanded his repertoire to include photographs of anything that catches his eye in the natural world. “It might be a spider on a sheet of ice, butterflies, sunsets. I have a particular fondness for mist, which my wife does not share. I’ll exclaim ‘What a wonderful mist!’ And she’ll say ‘Are you kidding me? It’s depressing!’” he said.

About eight hours of Danielson’s week is spent hiking with his dogs, looking for inspiration. He is dazzled by how often a familiar location takes on new life owing to a change in the light or season.

“There are probably three groups of photographers,” he said. “Some people are just in love with the technology. They love the cameras and they take pictures so they can use the camera. There are other people who are fascinated with forms and shapes. For me, the camera is simply a tool, but I need it to capture those moments that I think are so wonderful.”

Danielson is currently working on a book exploring such moments in southern Indiana and discussing his transformation from restaurateur to nature photographer.
“I live out in the country, and there were moments that just seemed outrageously beautiful, so I thought that others would be out there taking advantage of it. I was surprised to learn that there isn’t a single book about the natural side of this area,” he said. He will soon be looking for a publisher.

While Danielson has enjoyed the challenge of teaching himself the art of photography from the ground up, he recognizes that his approach might not work for everyone. The point, he said, is just to recognize and appreciate the natural beauty that is all around us.

“Get out and take the time to walk around and look around. Take your time and find those moments,” he said.
You can purchase Jeff Danielson’s photography at Ferrer Gallery in the Village Green Building, downtown Nashville, and view samples on the web at <browncountyphoto.com>.
See the center spread on pages 34 and 35 of this magazine for some additional shots.