Bear Wallow Distillery is much more than a business to owners Susan and Mike Spagnuolo—it is a tribute to one of the more colorful aspects of Brown County’s history.
“There is a huge moonshining history in Brown County,” Susan said. “It was very important to us that we honor that history.”

According to the Brown County Historical Society, moonshining dates back to the county’s founding in 1836. Settlers lived a rugged pioneer lifestyle, living in cabins and small settlements in the forest that covered the hills and valleys. While the hills, hollers, and bear wallows of Brown County made working the land nearly impossible, they also provided a sanctuary for moonshine stills and jugs.

Poverty left bartering as the only choice for many residents, and moonshine was one item that was always in demand.

“Moonshining was a way of life here. People accepted it, and that made it difficult to charge anyone during prohibition,” Susan said. “I have always loved the story about a man who was cleared of charges during prohibition. After his trial, he said, ‘I was acquitted by a jury of my customers.’”

On August 1, the Spagnuolos opened Bear Wallow Distillery, what they refer to as the first legal still in Brown County.

A 250-gallon copper pot is the centerpiece of the distillery, producing about 1,000 bottles of moonshine a week. This copper masterpiece was made by renowned still maker Vendome, known for making stills for Jack Daniels, Maker’s Mark, and Jim Beam.

Today, all of the alcohol sold at Bear Wallow Distillery is moonshine, also called un-aged corn whiskey. In November, the Spagnuolos will offer bourbon, made from 150-proof distillate and aged in charred American White Oak barrels.

All of Bear Wallow’s artisanal distilled spirits are handcrafted in small batches with 100 percent of the grains purchased from Indiana farmers.

“We went out of our way to make sure that everything was local, from our products to our equipment,” Mike said. “That wasn’t easy to do, but it was very important to us.”
So far, they have sold about 3,000 bottles, and have introduced hundreds of new customers to their smooth corn whiskey in the distillery’s tasting room. Surrounded by prohibition-era jugs and stills and a bar made of Brown County red oak milled just a few miles away, guests can watch the still in action through a wall of windows.

Visitors can taste the pure whiskey, but can also try it mixed with numerous flavors in what the Spagnuolos call Moonshine Shake-ups. Susan said the most popular shake-ups so far have been caramel apple pie, hot apple pie, and pumpkin.

“The cocktails are wildly popular,” she said. “We want to show people that you can use a good smooth whiskey in a cocktail instead of rum, tequila, or vodka.” 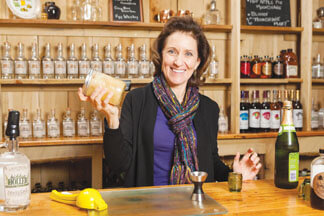 Along with three choices of whiskey, customers can purchase numerous flavored syrups and elixirs, used to make the shake-ups. The Spagnuolos even send customers home with the recipes.

After their first visit and tasting the Bloody Moonshine Mary Shake-up, Beth and Ron Sweet of Morgantown plan to become regular customers.

Ron said that in the past the couple visited Gatlinburg, Tennessee at least twice a year to buy moonshine.
“The first time I tasted it here I knew we weren’t going to have to go to Gatlinburg anymore,” he said. “I really like their moonshine, and it’s really cool that you can see how it’s made.”

Visiting with customers is Susan’s favorite part of her job as a new distillery owner.

“We have had people in from 20 states so far. We had a man from DC come in because he collects rye and wanted to have a sample of our rye. The other day a woman came in and bought moonshine to ship to her husband who is deployed in Iraq,” Susan said. “And locals come in all the time and tell us their moonshine stories. That’s the fun part, the people and their stories.”

Indiana’s first certified farm distillery, Bear Wallow Distillery, is located at 4484 E Old State Road 46, about five miles east of Nashville in Gnaw Bone. Look for the signs. Hours are Monday–Saturday: 11 a.m.–6 p.m. Sunday: Noon–5 p.m. Sundays feature tours, tastings, and cocktails only. No carry out sales due to state law.
Distillery tours are offered daily, featuring history of craft whiskey making in Southern Indiana and the process from selecting the grains to pouring whiskey in the glass.

For more Information call (812) 657-4923, visit <bearwallowdistillery.com>, or find them on Facebook at <www.facebook.com/BearWallowDistillery>.