Being capable of nearly everything made it that much harder for Hilary Key to settle on anything.

That predicament led the budding neuroscientist to walk away from an expenses-paid Ph. D. program with a 4.0 grade-point average in exchange for a life filled with toys and philanthropy.

Key, now barely on the heels of her 25th birthday, took ownership of The Toy Chest this summer with aspirations of transforming the specialty toy store into a vehicle to deliver educational and developmentally appropriate toys to children who have none.

More than anything, she hopes the buy-one, give-one social entrepreneurship model she is creating with her husband, Danny, not only grows beyond Nashville but also inspires young customers to give as much as they receive.
Laughing, Key laments that until about two years ago, she really had no clue what she wanted to do in life.

“I love to write, and I’ve always wanted to publish children’s books,” she said. “I really wanted to be an actress, and I was sure I would be a weatherperson at some point in time. I don’t think I ever wanted to be a fireman, but I wanted to be just about everything else.” 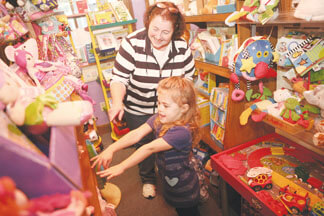 Ainslee Shaw, of Columbus, shows one of The Toy Chest’s stuffed horses to Nancy Fletcher, of Greensburg.

Truth be told, she probably could’ve achieved any dream.
The daughter of a physician, Key said she always considered becoming a doctor—mostly because she loved school, and she was good at it. She entered Butler University with an undecided major and graduated with undergraduate degrees in biology, chemistry, and French. In 2011, Key entered Purdue University’s neuroscience doctoral program, without a real career plan. During the second year of the program, fellowship applications began twisting her arm to define aspirations.

Key became determined to find her life’s passion. She journaled. She made lists. She wrapped her mind around the things in life that made her feel happy and fulfilled, and then she brainstormed ways to incorporate as many as possible into a viable career.

At the forefront was a 9-year-old girl in Togo whom Key lived with during an undergraduate summer program.
“My first night there, she asked if I wanted to play with her, and I asked what she wanted to play with,” Key said. “I couldn’t believe it, but she didn’t own a single toy.”

Key’s course changed drastically once she realized her life’s work: providing access to educational toys to children without.

Key also knew what she didn’t know—the toy industry.
The Martinsville native hopped into her car and trekked south in search of the little specialty toy store she occasionally had visited as a child. A month or two after filling out an application, Key received a call back that a weekend position had opened at The Toy Chest. Less than a year later, when the store’s longtime manager, Joyce Powell, became unable to continue working, Key quickly found herself managing the store and ultimately working toward its purchase.

During the whirlwind move to Brown County, she met fellow Nashville resident Danny Key, a real estate broker and IT coordinator who had been dreaming of someday owning a store in Nashville. The pair married just three days after her purchase of The Toy Chest was complete.
While dating, the couple wasted no time acting on Hilary’s dreams, by starting an online toy store that allowed customers to donate to children in need. Danny said nearly all clients eagerly chose to give after purchasing their own items. The Keys quickly amassed a stockpile of toys destined, they thought, for children in Africa. But when an onslaught of calls began coming for domestic donations—for children whose families had lost their homes in house fires, or those living in the foster system—they knew their plans had to broaden.

The couple since has merged the online business with The Toy Chest’s website. Now, upon buying an item in-store or online, customers can opt to buy a second item at half-cost to donate.

And with an inventory of about 10,000 items, The Toy Chest boasts options for every child or child-at-heart. Customers are delighted to find high-quality, popular brands including Melissa & Doug and Calico Critters, heirloom gifts ranging from Russian nesting dolls to china tea sets, and whimsical oddities like The Original Pocket Farkel.

Hilary hopes the buy-one, give-one toy store model is so successful that the Nashville business someday becomes the flagship location of a growing company. She also plans to eventually manufacture her own toys, to reduce mark-up and increase her giving power.

For now, the Keys are concentrating their efforts on increasing the store’s visibility, online and to those within visiting distance. Hilary said she wants The Toy Chest to become Brown County residents easiest and most obvious destination for birthday and Christmas presents. The couple also is hard at work perfecting plans for effective giving.

Hilary is confident that her goals at The Toy Chest will inspire others to give. She also thinks her journey into the toy industry gives hope to those who have yet to find their life’s passion.

“It’s hard work, but force yourself to make a list of the most important things that make you happy. It could be your kids, or running, or cooking. If it’s puppies, put puppies!” she said, laughing. “Making that list and thinking outside the box about how to turn those things into my life’s work gave me the courage to leave a path I shouldn’t have been on. And once I had direction, I knew I could do it.”

The Toy Chest is located in the Artists Colony Shops, 125 S. Van Buren St. in Nashville, Indiana. The website is <www.browncountytoychest.com> and the phone number is (812) 988-2817.