Many of us have, or have had, a favorite uncle. I know I did. His name was Bruce Collier. He was my great uncle on my mother’s side and he owned a restaurant over in Bloomington called Bruce’s Café. Some of you might remember it. Bruce was a veteran of WW II, a fisherman, I.U. basketball fanatic, and the best short-order cook I ever saw.

I threw that information at you because Bill Monroe, the father of Bluegrass music, also had a favorite uncle. His name was Pendleton Vandiver but Bill always referred to him as Uncle Pen. Uncle Pen was also on Bill’s mother’s side of the family and although Uncle Pen did not run a café, Bill appreciated his cooking. When Bill’s mother and dad passed on and Bill’s brothers scattered to seek out employment opportunities other than farming, Uncle Pen invited young Bill to come up and stay with him in his cabin on Tuttle Hill overlooking the town of Rosine, Kentucky. And while my Uncle Bruce didn’t play a fiddle, Bill’s Uncle Pen did.

This was an arrangement of mutual benefit as Uncle Pen had become crippled after falling off of a mule and needed someone around the place to take care of the chores and bring in a little cash. For Bill, it was a chance to learn music from a man who was still in demand as a fiddler for country dances. Bill did learn and he remembered the tunes his Uncle Pen taught him.

Bill wrote one of the greatest songs in the Bluegrass cannon about his mentor “Uncle Pen.” Forty years ago Bill Monroe decided to establish a fall Bluegrass festival to honor his favorite uncle.

Bill Monroe also wanted to come up with a way to acknowledge the efforts of the musicians and others who have made outstanding contributions to Bluegrass music. He and his son James started established the Bluegrass Hall of Fame Museum in 1984 in Nashville, Tennessee. The Hall of Fame Museum was moved to its current location in Bean Blossom in 1992.

Past inductees have included J.D. Crow, Jimmy Martin, Lester Flatt, and many, many more. Slated for induction this year on Saturday, September 27, 2014, will be former Bluegrass Boy and Sunny Mountain Boy, banjoist extraordinaire, and owner of the Bill Monroe Memorial Music Park, Mr. Dwight Dillman. 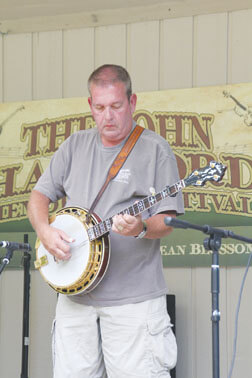 The festival begins on Wednesday, September 24 and runs through Saturday, September 27. That’s four big days of some of today’s greatest acts in bluegrass music. Included in the lineup are some of the originators of the music, folks like Jesse McReynolds, Bobby Osborne, and Doyle Lawson. And along with the old guard will be some of today’s great groups such as, The Grascals, James King, Michael Cleveland, and Paul Williams. There are thirty-three big acts booked to entertain us on the main stage.

There are great camping accommodations available whether you show up in a deluxe land yacht or a simple pup tent. There are hot showers and sanitary facilities. You can enjoy your own cooking or sample the delicious comestibles offered up by the many food vendors. I like to sample the different offerings: barbecues, tenderloin and fish sandwiches, and kettle corn, all made fresh and at reasonable prices.

There is a pavilion on top of the hill from the main stage where the bands do “meet and greet” sessions after their performances. It is a good time to get to know some of the musicians and get an autograph or two. It is also the place to pick up the latest CDs and some rarities not available anywhere else.

As you may have deduced by now, I really like the Monroe Music Park and the Uncle Pen Days and Bluegrass Hall of Fame Festival is a particular favorite of mine. It seems a little more intimate and maybe the folks who attend are a little friendlier. Or it might just seem that way because the festival season is coming to a close. I know if you play any Bluegrass at all—fiddle, mandolin, guitar, bass, banjo, or just the spoons—you can find a campground pick-up band to join.

The 40th Annual Bill Monroe’s Bluegrass Hall of fame and Uncle Pen Days Festival is right around the corner. If you are a Bluegrass music fan or just somebody looking to spend four days hanging out with real nice folks in beautiful Bean Blossom Indiana, I urge you to mark your calendar and order your tickets now.

The tickets for the full four days are $105 or $25 for Wednesday, $30 for Thursday, and $35 each for Friday and Saturday. Younger folks, 13 to 16 years old can take $5 per day off the standard price. For children 12 and younger the cost is free but they must be accompanied by an adult. To charge tickets and reserve camp sites by phone, call 800-414-4611 or go online to <www.Beanblossom.us>. You can email for more info <beanblossombg@hotmail.com>.

If you need directions just get yourself to Brown County, Indiana and ask anybody who looks like they live there and they’ll tell you. Oh, and don’t forget to tune your banjo. I’ll be lookin’ for ya!