Show trash to Gordon Jones and Sherrie Yarling, and they’ll show you treasure.

That ingenuity, combined with a complete disregard for sentiments that an idea can’t be done, propelled the couple to open the nation’s first factory turning the old, fallen bark of shagbark hickory trees into luscious syrup.
Now, the pair proudly supplies a whole menu of syrups, salts, and sauces to more than 300 restaurants nationwide.

And they’ve done it all over the last 20 years as a two-person operation, tucked away in a secluded Brown County operation known as Hickoryworks.
Jones’ entrance into the syrup world was as unlikely as him ever settling into one career.

The Montana-native confides that he met folks “with more money than God,” as he blurred through 17 different careers zigzagging the country in just a few short decades in his early life. A few of those jobs placed him as executive vice president and publisher launching Playgirl magazine; a radio broadcasting advertising director working with clients including John (then Cougar) Mellencamp, Kenny Rogers and Glen Campbell; and selling luxury Palm Beach condominiums at the Biltmore Hotel. 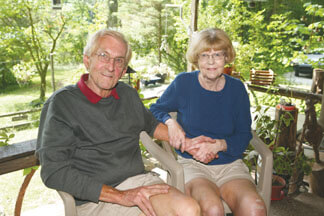 In the mid-1980s, Jones “looked up a girl I’d dated in the ’70s,” he said, shooting a sly smirk to Yarling. She soon moved to Palm Beach, where it took them just three short years to grow tired of Florida’s “terminal summer” and fast-paced life.

So they pointed their Cadillac north and didn’t stop until they reached Yarling’s family property in northern Brown County.

They bought a 70-foot mobile home and, on a whim, started raising dinner plate-sized shitake mushrooms and selling them for a pretty price to local upscale restaurants. One day an elderly man stopped to ask about buying, for firewood, the tops of some oak trees Jones had logged for growing mushrooms. The man happened to mention that his great-great-grandmother used to make syrup from the bark of hickory trees—just like the ones surrounding them. 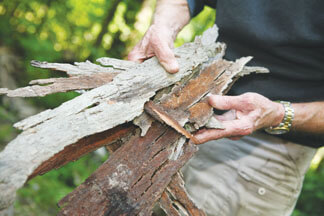 Intrigued, Jones took a stab at his own shagbark syrup.
“It was awful!” the now 72-year-old said, laughing. But Jones tried again, and this time he saw great promise. Soon, he was bringing samples to the chefs buying the shitakes. Even today, Jones doesn’t specialize in suggesting creative uses for the heavy syrup. “One chef would just find something they loved it for, and they’d tell someone else,” he said. “Before we knew it, we were getting calls for gallons.”

To simplify production, Jones called on skills he’d acquired growing up working with his dad in hardware stores and before long transformed a mountain of would-be trash into a commercial kitchen. A rotating 55-gallon poly drum equipped with sprayers on both ends replaced the laborious process of hand-washing bark. A behemoth 1970s commercial coffee maker took over brewing. Jones enlisted a central house vacuum system to help steam exit his syrup evaporator. And he fashioned a bottle dryer out of his father’s old, broken geothermal furnace and a pair of commercial hairdryers.

A tinge of sadness still lingers in Yarling’s voice as she recalls discovering that Jones had commandeered her sewing machine motor for a capping machine.
“She hadn’t used it in years,” Jones said, chuckling.
“I just told him he’d better never touch my heated rollers or hairdryer,” Yarling said, smiling back.

Jones is the breed of entrepreneur who never settles with good enough. After realizing obvious success with hickory syrup, he couldn’t help experimenting with new products.
“Truly,” he said, “sometimes I wish I could stop thinking.”
But that nag for new helped Jones and Yarling expand into selling Poplar Bark Syrup, Hickory Smoked Sea Salt, Bestcestershire Sauce (a shagbark twist on Worcestershire sauce) and Brown County BS (barbeque sauce).

Hickoryworks’ syrups have drawn acclaim from chefs including Julia Child and leading Indianapolis restaurants like The Oceanaire Seafood Room, Ruth Chris Steak House and St. Elmo’s Steak House. Folks have used Hickory Syrup in beers and cocktails, cookies, salad dressings, teriyaki glazes, on ribs, and over ice cream. Some even put it on pancakes.

When their products have been featured over the years by giants including the Food Network and The New York Times, Jones and Yarling have found themselves flooded by thousands of orders. They jokingly credit themselves for keeping the tiny, nearby Trafalgar Post Office open. Jones said after racking up a $13,000 bill from the office in short order in 2009, a very appreciative U.S. Postal Service representative showed up on his front porch, asking if there was anything the agency could do for Hickoryworks.
Jones proudly reports their business is “just weird enough” to draw so much media attention that he and Yarling never have paid a penny on advertising.

As for what he’s concocting next, Jones swears he’s finally finished expanding. But less than 20 minutes later, walking past the buried metal garbage can that helps him smoke hickory sea salt, Jones confesses he’s never tried smoking the Poplar Syrup and “just might have to.”
“Don’t listen to anybody,” Jones tells others who have seemingly crazy ideas. “If a man can think it, he can figure out how to do it. If people ever told us this wouldn’t work, well, we must not have paid much attention.”

Hickoryworks syrup is sold at the Nashville General Store on Washington Street in Brown County. You can also order Hickoryworks products through their website <hickoryworks.com>. Jones and Yarling are Indiana Artisans and are listed under “foodists” at <indianaartisan.org>.