The Property Creating a Space

Tthree years ago it was an empty two-acre lot rimmed by briars and other invasive species. Now, The Property, which sits at the southern end of Jefferson Street, is a lush green space. Its front boundary is marked by a thick natural fence fashioned of small horizontal tree trunks and branches, providing habitat for small animals and birds.
Sunflowers, zinnias, broomcorn, and bachelor buttons bloom profusely. Messages in pastel chalk on a slate near the road often invite you to notice the beauty of the day, or to share your thoughts in the suggestion book below. Free vegetables are often left for the taking.

The Property is the creation of Cindy David and Bob Vernon. And people passing by gravitate to the space, attracted by its beauty and their own curiosity. “Is it a park?” is the most frequent question they are asked. Bob says the answer is both yes and no. “We love to have people visit when we are here and we always invite them in, but not if we are gone. It’s a liability issue.” 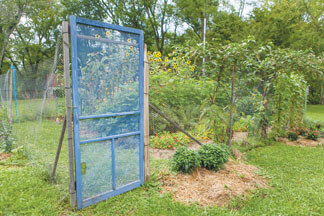 Just what The Property is and what it is going to be are living questions. “We know it’s going to draw people,” Cindy notes. “People talk about needing peace and quiet. We believe we’ll be having people here, but it’s a young park and we are a little protective.”

“It’s a challenging piece of property because it is in flood way and a flood plain,” Bob says. So in any planning, strict DNR and FEMA regulations have to be considered. “And whatever is planted has to be able to survive spring floods.”

Cindy quickly notes the upside. “The flooding provides an unbelievable habitat for wildlife and birds, from Baltimore orioles to hawks. We also have had some eagle sightings.” This spring, they put up a bluebird box at the edge of the flower garden. “It wasn’t five minutes before we had a nesting pair,” Bob recalls. “So far this summer, we’ve had three clutches.” 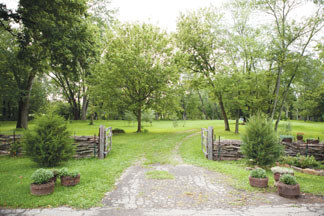 The couple has no sense of hurry. “This property teaches us all the time what to do.” Right now, they envision a gently used and mostly quiet space, one that continues to be a refuge. “We just put in big stones. And we don’t even let our grandkids climb on the stones, because we like the moss,” Cindy says.

Cindy and Bob invite participation with their welcoming presence and the suggestion book. They are there at varying hours three to four days a week, working and passing time with friends as they stop by. The Property already has a community feel.

Many neighbors have volunteered help: Jerry Pittman made a major contribution of limbs to the tree fence, Nashville’s landscape artist Todd Baker, who designs and maintains the town’s landscaping, including the parking lot across the street, was a natural connection. Nell Percival donated large blocks of Brown County stone. David Wagler helped remedy erosion problems.

One of the first steps was clearing the property of invasive species. Ruth Ann Ingraham, naturalist and author of Swimming With Frogs: Life in the Brown County Hills, helped with the identification of the invasive species. They pulled up the euonymus and stilt grass. Thick briars drove Bob and Cindy into long sleeves and coats, despite soaring summer heat, when they worked to clear them.
Cindy and Bob both have a Brown County heritage. They were friends and dancing partners in the early 1970s, during the last of Nashville’s quieter days when Foxfire books and Whole Earth Catalogs provided inspiration for dinner conversations and many of the small owner-operated shops simply closed for three months in the winter.

Cindy’s grandparents’ family farm was where the IGA is now. The David family farm, next to the Chuck Snyder family farm on State Road 46, was a huge influence on Cindy’s love for Brown County’s natural beauty and heritage. Bob was the roadie for the String Bean String Band, playing all the roles from sound guy, to lighting designer and driver for about ten years. Friends in the 1970s, the two became a couple shortly after Bob returned from California to Brown County in 2005.

In these first three years Bob and Cindy have put in a 350 foot log and branch wall, put water lines in, created a new 150 foot flower planter, fixed erosion at the drainage creek, and planted trees and flowers throughout The Property. “We got rid of all the invasive plants, but the maintenance will alway be an ongoing project.” They planted only native Indiana plants. “We’re trying to keep it Hoosier,” Bob says with a twinkle.

So if you see Bob and Cindy at The Property, stop and say hello. Share your ideas and dreams for the space. “The Property is a labor of love. We are searching for something to do with it that would suit us and benefit the town and county.”