Rose and Richard Poe have carved out their own pocket of home comfort and creativity off the beaten path near Gnaw Bone, Indiana. The green branches of the trees are echoed on the soft green walls of the small cabin that serves as Rose’s weaving studio. A four-harness floor loom, 60 inches wide, fills the space, with a piece being woven in the “blooming leaf” pattern on the loom. On the floorboards is one of the “looper” rugs that Rose has made from socks. Stacked on shelves and nestled against the walls are some of Rose’s handmade baskets of different sizes and decoration.

In many ways, the baskets are kinfolk to Rose’s beautiful overshot pieces from the loom. While living in Cincinnati, Rose started making baskets and going to craft shows in the 1980s. The small shop that supplied her reeds for basketry also sold looms. Her interest led to the purchase of a loom in 1986, and the owner of the shop provided a couple days’ instruction on threading the loom. 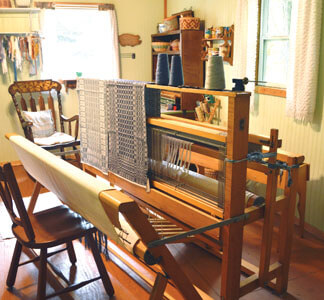 Fed by the memory of a picture of a beautiful coverlet in a history book that she saw when she was about ten years old, Rose taught herself to weave the overshot patterns of the Colonial period. Not many weavers do overshot, where perle cotton is used for the warp. Some of the old pattern designs are “log cabin” or rep weave, “Lee’s surrender”—a dark blue with white overshot—and “wheel and cross.” Another pattern called “barley corn weave” has a back that looks like netting. Other overshot pieces have the backside looking like the reverse pattern of the front.
Working several hours every day, Rose has produced an inventory of table runners, scarves, and towels. Some other patterns include “huck lace” and “M’s and O’s”. She has woven rugs of varying sizes and she plans to weave a traditional coverlet.

In a way, Rose is a craftsman handing down history. She tells of a battlefield photo of Abraham Lincoln and General McClellan that includes a coverlet draped on a table. With the carefully graphed pattern of this coverlet found in Handwoven Magazine, Rose reproduced the piece.
Rose was born and raised for ten years in Rockford, Michigan. Her parents then moved her and her sister to Arizona. When she and Richard married, they lived in San Diego and Seattle while he was in the Navy. They have moved several times as they raised their two sons, Josh and Jeff. One home was a log cabin with a wrap-around-porch in Aurora, Indiana. Seeing an old loom listed in the classifieds for a surprisingly low price, Rose found the old loom in pieces in the yard of the seller. “I couldn’t just let it rot on the ground!” she exclaimed. The loom was bought and put together on the porch of her cabin.

In 2003 they purchased land near Gnaw Bone, a location between their home in Janesville, Wisconsin, and family living in Cincinnati. Rose and Richard retired to Brown County from Janesville in 2007. Richard pursues his interest in restoring old Studebakers—he presently has three. Rose devotes time to her weaving. Josh now lives in Washington, D.C. Jeff and wife, Stephanie, live in Whiteland, Indiana, with their sons Parker and Quinn.
The Poe’s have felt at home since arriving in Brown County. They have good friends in the car club, and Rose was supported by local fiber artists. She was a guest artist with Christ Gustin during the annual Studio Tours.

This past February, Rose was accepted as a member of the Indiana Artisans. Participants are accepted through an adjudicated process that focuses on design and quality, technique, and authenticity that best exemplifies the tradition of Indiana. The Indiana Artisan Marketplace will be added to her schedule of shows where she will show and sell her handwoven pieces. The 2015 Indiana Artisan Marketplace will be held on Saturday, March 28, and Sunday, March 29. The show is located at the Expo Hall at the Indiana State Fairgrounds.

Her work will be at the following 2014 shows:
Fiber Arts Show and Sale in Bloomington, November 14 and 15 to be held at the Bloomington Convention Center at 302 South College Avenue. The Brown County Winter Art and Craft Fair, on Friday and Saturday after Thanksgiving, November 28 and 29, sponsored by the Brown County Arts Guild at the Seasons Lodge Convention Center. The Gingerbread Christmas in Plainfield, a one-day show sponsored by Plainfield Tri Kappa, on December 6 from 9 am to 3 pm, held at the Plainfield High School Fieldhouse. It is located at 1 Red Pride Drive, at the corner of Reeves Road and State Route 267.

Her work is also found in the Brown County Craft Gallery on Main Street in Nashville, Indiana.