Brown County painter Dick Ferrer is, at 67, filled with a reverence for life that is as much a part of his canvases as the paint itself. He has won many awards and has sold work in recent shows of the Indiana Heritage Arts Annual Exhibition, Hoosier Salon, and the Indiana Plein Air Painting Association. He has never taken an art lesson or drawing class—at least in the formal sense. Instead, he calls himself a beneficiary of the work of fellow artists who share unselfishly. “Somehow,” he says with straight-faced humor, “my work doesn’t look like their work, though.”

Drawing comes easily. Ferrer has a natural ability to understand and draw perspective, which he attributes to nothing more than “good hand-eye coordination. I drew all the time as a little kid. The first thing I drew was a horse.”

Even today, his subject matter tends to be either the natural world or a man-made world that is fading away.
He paints prolifically. Animals, cars, landscapes, old tractors, and iron bridges seem to be his native language. Although what he paints is part of our daily life, he finds a perspective that makes it noteworthy. Anything is fair game, as long as it has unique qualities, drama—a story to tell. “I don’t like cityscapes and buildings that much. I like the freedom of painting the natural world.”

During the Vietnam War, from 1967 to 1971, he served in the Air Force. For most of that time he was a surgery technician in the Philippines, For eight years after leaving the service, Ferrer went to school full time and worked full time. He majored in political science and minored in anthropology and history. 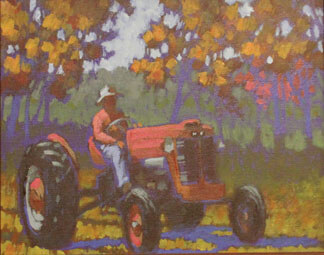 Until his recent retirement, Ferrer worked in Indianapolis and painted during evenings and weekends. He and his wife, artist Dixie Ferrer, moved to Brown County from the city about 18 years ago. They established Ferrer Gallery, located on the second floor of the Village Green Building in downtown Nashville.

Ferrer was drawn to Native American culture in the late 1980s, particularly that of the Lakota Sioux, and remains deeply influenced by it. He participated in sun dances at Kyle, South Dakota, and continues to assist with ceremonies as a singer and drummer. Some of his first serious artwork was a series of tribal art pieces done mostly in pen and ink. Now he uses acrylic paints, which are fast-drying and vivid.

“My major influences are John Nieto and Howard Turpning. Nieto paints in acrylics like the majority of Southwestern Native American painters.” Ferrer considers Turpning one of the best living artists in the world. “His work never looks like its posed. It is all so natural and impressionistic. The [brush] strokes define what it is.”

Ferrer’s paintings of cats, bison, ravens, and crows have made their way into the homes of many collectors. They reveal a recognizable and humorous fusion of animal and human nature.

“Everything is alive.” Ferrer observes. “We’re just animals that have an overdeveloped sense of communication.” He adds that, “crows and ravens are the smartest birds in the world. They have that communal life. For many tribes, with the notable exception of the plains Indians, ravens are the tricksters. Bison are an icon. Whenever they stop, it’s a painting. Cats are perfect models. They act like us, or we act like them, I’m not quite sure which.”

Now that he is retired, he is increasingly involved in plein air painting, enjoying the magic light that drew the early Brown County painters. “I work out most of the details of a painting in my head before I do it, so once I paint, it’s pretty quick. I’m trying to paint out more and more.”

Ferrer starts with a very dark canvas, an unusual point of departure. And he has recently changed his color palette. “I’m doing more blue and purple now, I used to do burnt sienna. I like the way the blues and purples bleed through, and they are complementary to so many colors I’ve gotten bolder with my colors, simpler in my subjects, and bolder in my strokes.”

When asked if anything felt unfulfilled, Ferrer states that Fred Rigley used to say that artists are “afflicted”— that they have to do it. “I think the humble artist is an oxymoron. By being an artist you are taking time away from other things. Art is a part of you, so you have to be a little bit like any performer, you must have enough ego to believe it is good enough that people will want to buy it. I think the only thing unfulfilled is probably having more time for the people I love.”

See the work of Dick Ferrer and approximately 30 other artists at Ferrer Gallery, 61 W. Main St., Nashville and on-line at <www.ferrergallery.com>. Ferrer accepts commissions and can be contacted through the website or through the gallery at (812) 988-1994.