Skip to content
Kenan Rainwater and the River Flows

Thin and intense, singer-songwriter Kenan Rainwater has direct blue eyes and a voice that has been compared to Johnny Cash’s. It’s a deep baritone that can carry a hard edge, but it holds enough raw longing to qualify for the comparison. As one of the Indiana Boys (IB), Rainwater has been adding electricity to the Brown County and central Indiana music scene for the last four years. And now, he’s stepped out on his own with the New Year’s release of his first solo album, The River Flows.

Electric guitar throughout, and the doo-wop rhythms and harmonies of the first three songs, tell you that Rainwater is definitely into something new. The music is danceable and light, filled with the nostalgic sound of the seemingly more innocent 1950s. 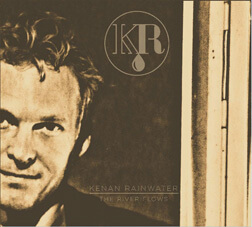 All the songs on the album show blues guitar influences, bends in notes and shifts in rhythms that are a definite step away from the bluegrass-rooted sound of the Indiana Boys. His harmonica playing is more soulful, less confined by the beat. Yet, IB fans will feel at home with songs like “Harlan County” and the album’s title song, “The River Flows.” The genres are tied together through the instrumentation and the energy Rainwater and his band bring to every song.

Rainwater is all about local music and all but one of the members of his new band are Brown County-based musicians: “Picker” Dan Bilger of the White Lightning Boys, Darrick Day (of the Cox brothers) and Monroe County’s Laura Wanner—the “Wall of Sound” with the Vallures.

The Reverend Peyton’s Big Damn Band is one of Brown County’s most successful bands, with seven albums, a world-wide touring schedule of more than 200 dates a year, and attention from the national press.

Rainwater hesitantly approached Peyton at Nashville’s local musician’s haven, Muddy Boots, asking what he needed to do to capture the gold ring of musical success. The answer was terse. “Sell everything you own, buy a van, and go on the road.”

It’s taken a long time and a lot of reflection for Rainwater to accept the need to tour, but now he is working on booking 200 dates for 2015. He’s revamped his website and added videos to YouTube thanks to Dave Wallace. Rainwater and Cari Ray are contemplating some touring together. The Rev’s “Don’t waste it, tour at least regionally. Bands that don’t tour don’t make it,” led to Rainwater’s plan to begin touring in a six-hour radius on the weekends: St. Louis, Columbus, Cincinnati, Louisville, maybe Chicago “If it works, I’ll take it further.”

Despite the intensity of the new direction, according to Rainwater his emergence, both as a solo act and as the central figure in a new four piece band, does not end his participation in the popular Indiana Boys. “I’m open to whatever happens.”

Rainwater is conscious of all that he has received as he’s grown musically and personally. The gratitude for it is deep, and you can feel it when he talks about sharing music and all that Peyton has taught him, especially during the production of this album. Two years ago, he was content to play locally and to love the life of the bonfire music scene. Now, it’s different. He’s awake and focused on taking a bigger ride.

“Going out into the world and playing music is what I feel like I need to do. My whole life, I’ve never dreamed of doing anything. And then this year, I spent my 33rd birthday singing the vocals of my own songs in a studio.”

Although he doesn’t say it out loud, that day was a sign, an empowerment of his new direction. He now has the desire to both venture out to “make his mark” and to someday share what he is learning along the way. He sees himself teaching what he has learned, and teaching younger musicians here.

For Rainwater, however far he goes, Brown County will never be far away.