Story and photos by Jeff Tryon

The installation is the work of Brown County sculptor William Galloway, a nationally recognized architectural sculptor who has worked on a wide variety of projects, from a new pediment on the Iowa statehouse to the restoration of the New York Times Building in Manhattan, to the corporate headquarters of Eli Lilly in Indianapolis.
The 10-foot tall, 4,000 pound sculpture, which depicts dancers holding aloft a colored glass disc, commemorates the town’s designation in 2012 as an Indiana Cultural District. It is one of five districts (the others are Columbus, Lafayette-West Lafayette, Bloomington, and Carmel) which will receive similar works commemorating their designation by the Indiana Arts Commission.

Galloway initially created the design of male and female dancers intertwined as a 22-inch-tall, 4-pound mini-sculpture to be used as individual Governor’s Arts Awards given by the Indiana Arts Commission, but then came up with the idea to create larger versions for each of the designated districts.

“They had to be lightweight so that people can carry it and not drop it,” he said. “I tried to make them have a lot of visual presence, apparent size, but really thin and lightweight. 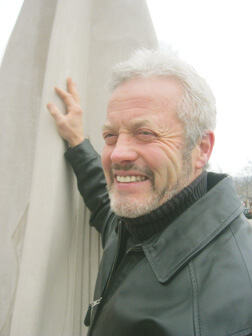 “Then I thought, that would look good in big ones too, give you a lot of vision at a distance, and defeat a lot of the problems with big art, especially limestone. It’s heavy and the foundations are expensive and moving it is tough and setting it is tough.”

He offered the designs to the Arts Commission as a way to promote the Governor’s Awards and to bring outdoor art to the cultural districts.

“There’s kind of a groundswell now of people coming back to the arts, of it not being the first thing cut out of the budget,” Galloway said. “Public art that people can experience, not in a museum, is something that they want to try to promote. It’s a way of promoting limestone, for one, as a traditional art of this state and that can be a viable public art—affordable, movable.”
He said the glass disc atop the sculpture—meant to suggest falling leaves—was made at Kokomo Opalescent Glass, one of the oldest glass manufacturing facilities in the country.

“Those things are one shot deals; they have no idea what they’re going to look like,” he said.

Galloway is in the midst of creating pieces which are all based on the same theme, but will each be unique, he said. He said the vision that the council was seeking led him to more modern, “art deco” style.

“There are two figures dancing in each one, but they’re kind of changing,” he said. “When I saw the site for the one in Nashville, I realized that because it would be a high traffic, hands-on, location I needed to change the dancers so that they was less chance of anything being climbed or dropping and hurting somebody. Safety is important because it’s right on the sidewalk and there’s kids and everything. You can touch it, you can lean against it. They show me what they think is a good spot and I want to design the piece so that, depending on the use and the proximity of people, it will be custom fit to that area,” he said.

Galloway lives in Brown County but does his carving at the Angelo Stone Company mill near Bedford, which he founded in 1994. A master stone craftsman, Galloway creates statues and sculptures, architectural elements, and other carvings used in churches, public buildings, and residences.

The sculptor has also been working on fine-art projects, and is working with a New York firm on Japanese style stone furniture.

“I’m trying to combine sculpture with usefulness,” he said.
“A lot of people feel like they don’t have the money for sculpture, they don’t see the need for it. But if it’s useful— tables or benches…. I laid down one of these dancing sculptures and I thought, ‘Hey, that’s pretty cool, too.’ So I think one of these is going to be laid down as a bench.
“That’s exciting to me,” he laughed. “I guess my life’s pretty boring.”