Looking Back at Story

The picturesque little hamlet known as Story is often described as “charming,” “quaint,” and “out-of-the-way.” Coming to or leaving Nashville, Story is located about ten miles south on Route 135 from where it splits off from Route 46. The road is scenic, with trees and wildflowers growing up beside fencerows.

On September 30, 1809, a treaty between Governor William Henry Harrison and the Miami tribe opened the area of the state of Indiana to settlers of European descent. Three million acres became available to newcomers by what has become known as the “Ten O’clock Treaty.” The treaty’s boundary line ran from Raccoon Creek on the Wabash River to the town of Seymour and cast a shadow at 10 a.m. on September 30. Today a carved limestone monument marks in the center of the village green where the Ten O’Clock line bisects the town of Story. 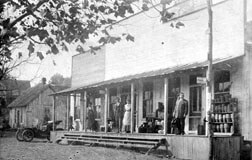 This original store burned in 1915 and was replaced the following year. Alra and Mary Wheeler are pictured. photo courtesy Rick Hofstetter.

Story was named for its founder, Dr. George Story. In 1851, with the grant of a land patent from President Millard Fillmore, the physician was one of many who migrated from the high hills of southern Ohio to the Brown County of Indiana. Coming from a family of timber foresters, Dr. Story and his children built many of the structures in Story using wood from the surrounding hardwood forests.

The village was a prosperous hub for the farmers nearby. Within thirty years, there were two general stores to supply staples and dry goods that couldn’t be raised or made at home. Crops of wheat and corn were taken to a local mill for grinding. Timber was taken to the Story sawmill as the sound of the blacksmith striking his anvil filled the air. The blacksmith kept the plow horses shod, even as he kept the plows sharpened. In the autumn, a slaughterhouse was kept busy with killing hogs, smoke-curing hams and bacon, and providing the fat to housewives for rendering the year’s lard and making lye soap. A nondenominational church, post office, and one-room school house anchored the community. During the early decades of the 1900s,
Route 135 became one of the main highways in the township. Children were dropped off at the Story general store, where they would catch a bus to ball games in Nashville or Van Buren. For a brief period in the 1920s, a Studebaker buggy factory occupied the General Store.

The Great Depression harshly interrupted the tranquil containment of the community around Story. All construction of new buildings stopped. From 1930 to 1940, half the population of Brown County left their homes in search of employment. Story never recovered from this loss, though the grain mill was kept busy into the 1930s providing the raw materials for the “bathtub gin” made by some who stayed. Reforestation efforts by the federal and state governments led to the establishment of Brown County State Park and the Hoosier National Forest.

In 1960, the United States Army Corps of Engineers flooded the area to “fulfill its commitments to flood control and future water supply for the City of Bloomington.” The lake created, Lake Monroe, is Indiana’s second largest lake. The little town of Elkinsville now exists under its water, and Story’s access to Bloomington, the Elkinsville Road, now comes to a dead end four miles west at the remains of a fallen iron bridge. Story’s landmark General Store continued to provide travelers treats and leaded gasoline, as evidenced by the gas pumps still standing.

In the early 1980s, the General Store was purchased by Benjamin and Cynthia Schultz. They created a bed and breakfast known as the “Story Inn.” No attempts had been made during or after the Depression to update the building, so the wooden floors, stamped tin ceilings, and globe lighting remained intact. This was a dream venture for the couple, with Benjamin shoring up the building with his handyman skills, while Cynthia practiced her culinary talents. Their children were born in one of the upstairs bedrooms. Over the next fifteen years, the couple acquired the surrounding 23 acres that made up most of the town. The authentic style right from the 1800s makes Story one of the best preserved Midwestern towns from a bygone era.

Frank Mueller and Rick Hofstetter purchased the Story Inn and adjacent buildings in 1998. Fine dining, catering, lodging, and hosting events are now part of the Story Inn’s offerings, which include all the historic buildings in the town of Story. The Old General Store, the Treaty House, the Alra Wheeler homestead, the Carria House, the Old Mill house guest rooms and cottages. All are tastefully restored and decorated. The Old General Store is a well-known gourmet restaurant, and its basement is a tavern and wine cellar. The Story Inn hosts the annual Indiana Wine Fair, and the Hoosier Hops & Harvest.

Dog and horse lovers can bring their animal companions to Story Inn. Ten rooms are designated to allow canine friends. A 12’ x 12’ stall is available for an equine companion. Arrangements must be made beforehand with the Story Inn reservations office.

For information about rates and reservations, phone (812) 988-2273. A beautiful virtual tour of available rooms and cottages can be found at <www.storyinn.com>.