Ironically, Larry and Jan Spears had to move their showroom from their home in southern Brown County to Nashville to spend more time together. “There just wasn’t enough business out there at the shop,” Larry says. “I had to do so many shows, almost every weekend, traveling all over the country. One of the reasons it’s nice to have a place like this downtown is to make the income so I won’t have to drive so much.”

Spears Gallery sits at the heart of Nashville’s arts and entertainment district, Arts Village Brown County—not just physically, but historically as well, as it’s located in the very building where Portia Sperry pioneered the business of locally handcrafted merchandise at her shop, Brown County Folks. There, she sold everything from locally-produced candy, basketry, and woodcraft; while helping midwife the birth of distinctive Brown County pottery. Her greatest triumph, of course, was the Abigail doll. “I still have people who come in and tell me that their grandmother worked right back here making the Abigail dolls,” Jan says. 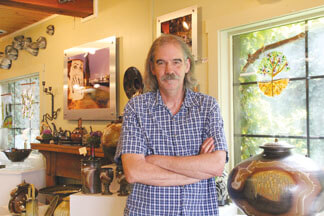 “Sperry commissioned (the potter and Indiana University art professor) Karl Martz to build the beehive kiln that’s been made into a planter out front,” Larry says. “She carried his work in here and, I think, some of the Hohenberger photography. It’s kind of come full circle,” he adds.

From Columbus, Indiana, pottery started as a hobby for Larry around the same time he met Jan. When the hobby turned into a serious pursuit the couple decided to pull up stakes and move to Gatlinburg, Tennessee, where they learned the art of making and selling pottery in a very demanding market.

It was while visiting their parents in Columbus that they began exploring Brown County and thinking of it as a place they could wind up one day. After 14 years of 12 hour days they found the right spot, moved their family, and opened a small showroom in their home. 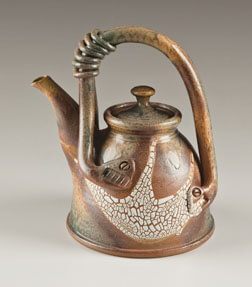 Larry built a gas kiln and started making the pottery he’s famous for, his rich, inventive glazes finding home in many collections around the country. Soon, with the help of an apprentice and good friend, he’d added a wood-fired kiln, “which is called an anagama kiln, a Japanese type of kiln,” he says. “You can put pieces in it without glazing first.”
A very labor intensive process, wood-firing takes sixty hours of constant attention. “We take four hour shifts and keep putting wood in the kiln,” he says. But the reward for all this labor is a distinctive kind of glaze where chance guides the final product. “Wood ash goes through the kiln and lands on the pot,” Larry says. “The ash actually melts and has enough silica in it to make its own glaze adhere to the pot. You get things called ‘flashing marks’ where one pot is setting next to another and you’ll see where the flame went through.” He picks one up from a display to point out the stages of the process.

“You can see that all the ash hit here and then started coming around and dripping off. This one was close to the firebox, so it got a lot of ash. You get all kinds of stuff, like crystals growing in it, because of the cooling in the kiln. You can set pieces on sea shells, which are calcium, and that disintegrate, leaving glass marks—the imprint of the shells.”

Larry’s latest project is a soda kiln that he’s building, made possible by an Individual Artist Grant from the Indiana Arts Commission. “It’s very similar to a salt kiln, but not as corrosive,” he says, excited at the prospect of learning a new process.

“I’m fortunate to able to still do this for such a long time,” he says. “There are certain things that keep me going—finding new things, new glazes, a new technique. It’s not just a job, it’s a continuous learning process.”
“This gallery represents family and friends,” Jan adds, looking around the room to where her husband’s work is displayed, her sons’ photography and sculpture, and the jewelry, basketry, wood and metalwork, and painting of their many neighbors. After twenty years in Brown County she says, “I think we’re going to call this home. This is a good place to stay.”

Spears Gallery is located at 15 N. Van Buren Street in Nashville. Hours are 10–5 daily. The phone is (812) 988-1286 and their website is
<www.spearspottery.com>. In Bloomington you can find Larry’s pottery at By Hand Gallery, 101 W. Kirkwood, on the Courthouse Square.