For some folks the first evidence of spring is the arrival of the first robin. For others, it’s the singing of the spring peepers. But for some of us down here in Brown County, it’s the call of the wild morel. I know there are some of you who will raise an eyebrow at the assertion that a simple fungus has a voice but let me assure you I know of more than a few folks who can hear ’em. I figure they must hear ’em because I sure don’t see ’em. There is help for those of us who are somewhat mushroom-hunting impaired—the third annual Morel Festival.

If you ask “What is a morel?” you would be giving away that you aren’t from around here. A morel is a mushroom. It is not your ordinary grocery store mushroom—it is special, a gift of sheer delight from Mother Nature to your tongue. If the truffle is the king of ’shrooms then the morel is the crown prince. And you don’t have to go to Europe or rent a pig to find morels. They are found right here in Brown County!

The festival is a celebration of the emergence of these unbelievably tasty little critters and a great excuse to finally get out of the house for a reason other than snow shoveling. Morels inhabit the Brown County underworld for most of their existence, but like the native “Groundus Hogus” they emerge from their dens in the spring to cast their shadows heralding warm and sunny days to come. It sounds worth celebrating to me.

The festival includes a great variety of activities including lectures by leading mycologists (educated mushroom fanatics), workshops on hunting and cooking the tasty little morsels, mushroom forays (guided hunts), live music on stage in the evenings, a morel auction, and more. The kids also have their own activities such as guided mushroom hunts, crafts, and a “Kid Zone.” 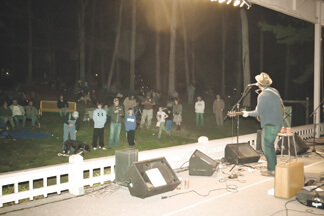 The adult tickets for the weekend are down-right reasonable. You get a choice of tickets and prices so that you can customize your festival experience. If you go on-line to their website <www.morelfestival.com> you can order tickets right up to April 15. After that, you can still get ’em at the gate. 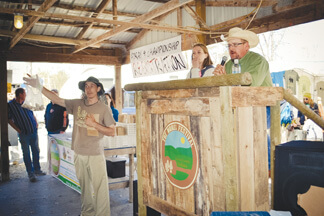 The on-line tickets run $125 for an Xtreme V.I.P. ticket which entitles you to entrance to the Bill Monroe Memorial Music Park and Campgrounds, any or all the lectures and classes, your choice of “forays,” admission to the concerts, the official Morel Festival tee shirt, a spore bag for hunting, and entry to the championship hunt. $75 will get you an “Original V.I.P.” ticket that includes entrance for the weekend, admission to the concerts, the foray of your choice, and a festival tee shirt. A $40 ticket gets you in for the weekend, the classes, and concerts. After April 15 you can still get tickets at the gate but the prices go up a little bit. They will be $160 for the ‘Xtreme V.I.P.” ticket and $90 and $50 respectively for the others. Day passes will be available at the gate for $25 and kids 12 and under still get in free with a paying adult. Concert only (after 7 p.m.) tickets will be just $10. 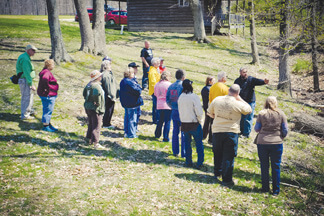 The Morel Festival is head-quartered at the Bill Monroe Memorial Music Park and Campground located in Bean Blossom. The park is 55 acres of trees and camp sites that accommodate your basic land yacht to pop-up campers and primitive. But if you leave the RV at home there are many local lodging options.

I’m looking forward to the Morel festival because no matter how good you are at ferreting out fungi you can always learn something new. I found myself in a fungus finding slump a while back and I was having a terrible time. I couldn’t figure out whether I was wearing the wrong style of camouflage or the mushroom mating call I was using wasn’t the right dialect for the morels of Southern Indiana. Maybe I was wearing my upland boots looking for low land morels.

If you find yourself identifying with any of these little glitches in the sport, you just might want to consider upping your game by spending an edifying weekend at the morel festival in Bean Blossom. Friendly folks are there and ready to help you out. So come on down and have fun with the fungi at the Bill Monroe Memorial Music Park and Campgrounds April 23 through April 25, 2015.