Skip to content
Daniel Harden Family, Service, and Fire in the Belly

Daniel Harden
Family, Service, and “Fire in the Belly”

The branches of the Harden family tree cast shadows that are wide and long in Brown County—and its roots are just as deep. Patriarch, Weber Clinton Harden, was born in 1897 in the area of the Brown County State Park “somewhere around Weedpatch Hill.” Family lore is that he was chased by the sharp legs of starvation, and moved to Bartholomew County in 1913 where he worked in Mooney’s Tannery, which was located in the area of present day Millrace Park. Weber “Web” Harden, Jr. and his wife, Wilma Jean (known as Jean), raised their own brood in Brown County. Web Harden was a hard working man with a keen, distinctive drive. A high school dropout, he became a registered engineer. He worked on many of the local bridges, including the one in front of the Columbus Hospital, and was instrumental in moving the covered bridge to Millrace Park. He and Jean had five children, who are all part of the Brown County community today: Daniel, was Building Commissioner from 1988 till retiring recently; David, currently the County Surveyor; youngest son, Doug, works for Nashville architect, Steve Miller; daughter Vicki is a registered nurse; and Debbie lives in Willow Manor. This story is about Web and Jean’s oldest son, Daniel, known by most as Danny.

Danny Harden was born in neighboring Columbus Hospital. He attended Nashville Elementary School. Just a young child, he worked for his father in the summers as a “snake beater” for survey crews. His tool was a big machete, making him the “little boy with a big knife.” In 1971, he graduated from Brown County High School. He learned surveying, construction engineering, and draftsman skills while on the job for his father’s Associate Engineering, which later became Harden Engineering.

Danny and his wife Vicki, married on May 31, 1975. They have four children: Jason, Kristina, Jeff, and Kelli. All the children graduated from Brown County High School.

Today Jason, Kristina, and Jeff have made Brown County their homes. Kelli and her family live nearby in Seymour.

In 1988, Bonnie Robison asked Danny to be Building Commissioner, a position providing direction for the Brown County Planning Commission. “You gotta be a servant to the people,” explains Danny. He was a mediator between owner and builder, a job he enjoyed immensely. On September 22, 2014, he had open heart surgery, an experience that has made the minutiae of daily life crisper and more appreciated. He retired as Building Commissioner in November of last year. Looking back with satisfaction, Danny said he was involved with the new larger buildings in Nashville, buildings that allow Nashville to retain its uniqueness, including the new Brown County History Center on Gould Street. He is especially happy that his replacement is Lonnie Farlee, a man like himself who “also has a servant’s heart.” 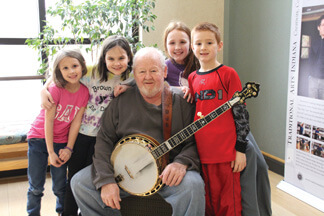 Some of Danny’s grandchildren joined our photo shoot at the library: Isabel, Aubrey, Emma, and Eli.

Danny can pinpoint the exact time in his life when he felt the “fire in the belly” sparked by Bluegrass music. In 1949, his mother’s coalmining father moved up from Whitesburg, Kentucky. When he was twelve years old, Danny and his family went to see great Uncle Arthur Banks in Hope, Indiana. Uncle Arthur was picking out Bluegrass magic as he played an old claw hammer banjo. Dan had to have one! Web Harden went to Sears and bought his son a Silvertone banjo for $43. All the boys started playing Bluegrass—Doug got a mandolin, and Dave got a guitar. Web drove his three sons everywhere to play Bluegrass tunes as the “Brown County Boys.” Web also honored his father-in-law by writing a song entitled “Pine Mountain.”
Since then, Bluegrass music has been a major thread throughout Danny’s life. When he was thirteen years old, he played with Bernard Lee, Charlie Percifield, Jim Bessire, and Marvin Hedrick as the Weed Patch Boys. “They opened the gate around here (at the square dances at the State Park). On these nights, as song followed song followed song, “The band didn’t stop playing till the people stopped dancing.”

Danny now works at the Bill Monroe Music Park for his good friends Dwight and Becky Dillman. It is the home of the oldest continuous Bluegrass Festival in the World—this year being the 49th. He reverently calls Bean Blossom the “School of Bluegrass,” and marvels that he lived in Brown County during a unique era of Bluegrass music. He personally knew “musical genius” Bill Monroe, Flatt and Scruggs, Reno and Smiley, plus other Bluegrass notables.

Retirement never comes to a Bluegrass musician. Dan now plays a 1934 RB5 Gibson Mastertone banjo with his band, Hamilton Creek, which has been together for around five years. A “band of brothers with different mothers,” the group is made up of Danny on banjo; Dave Conner on fiddle and mandolin; Frank Hilligoss plays bass; and Neil Smith, who joined the group about a year ago, plays guitar. The group’s weekly schedule includes Wednesday night practice sessions. Hamilton Creek played on the February episode of the WFHB Brown County Radio Hour that can be heard through the website <browncountyhour.com>. The band is planning to record a CD with ten to twelve songs. The Hamilton Creek Facebook page will keep fans apprised.

What else follows for Danny, who counts wild turkeys, groundhogs, and coyotes as excellent neighbors? With deep respect evident, Danny says he wishes he could “download” what older folks know. He counts Jim Owens and Ed “Brownie” Brown as wise friends. He also wishes more young people would stay in Brown County. Like his parents—Web, who died in 1986 and Jean, who died in 2007—his family is foremost. He and Vicki have twelve grandchildren, aged from less than a year to 13 years old. Jason and his wife Brittany have Eli, Emma, and Isabel. Kristina and husband Robby have Zoey, Zamilee, and Zilah. Kristina and Robby have also adopted three little boys—Edric, Donnie, and Xavier. Jeff has a daughter, Aubrey. Kelli and her husband, Adam, have Landon and Dillon. The family vacations en masse, with past destinations that include the Gulf Shores, Alabama and Gatlinburg, Tennessee. An upcoming cruise to the Bahamas will warm all the Harden clan together.