Story and photos by
Paige Langenderfer

As a visitor stood in awe, John Lawrence transformed a clear glass rod into a perfectly formed leaky faucet. As he has done thousands of times before, John held the glass rod over a torch and twisted the glass as it congealed into an orb-like mass. He then expertly gave the sculpture its shape with light touches from his metal tools, all while rotating the glass over the flames to keep the glass heated from all angles.

Within minutes and a few seemingly effortless movements, John placed a beautiful and intricately designed leaky water facet into the kiln to set up overnight.
John and his twin brother Jim, and their father Dick Lawrence have been shaping glass since 1967. Their start in the industry was a bit unexpected.

“Dad went to Indianapolis one afternoon to volunteer for the Korean Conflict and stood in line with a man by the name of Jack Bohlander,” said Jim, 58. “The two instantly became lifelong friends.”

After the war, Bohlander opened a traveling carnival business in central Indiana. Dick Lawrence, who was a physical chemistry professor at Ball State University, asked Bohlander if he and his sons could help out in the summer.

“We had never done it in our lives. We had grown up at the work bench in the garage building things with our hands, but this was completely different,” John said.

Learning the trade was not an easy assignment.

“At that time there were not many people doing this type of work. And those who did were very secretive about it,” Jim said. “Glasswork was a craft that was only handed down within families and people didn’t share their techniques with others.”

The three dove into the trade the best way they knew how.
“We started by using old Coke bottles. We would break them up and feed them into the fire,” Jim said. “We would just stick glass into a fire and try to make something with it.” 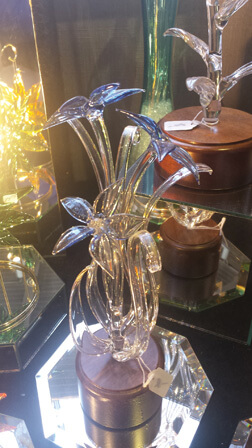 Dick and his sons traveled with the carnival for eight years, performing live glasswork demonstrations out of a trailer and selling small items to carnival attendees.

“We weren’t experts by any means. We mostly learned by trial and error,” John said. “We had maybe 15 items that we could make regularly. Today we make 1,000 different designs. We had a long way to go.”

In 1976, the Lawrence family decided to open a store in Nashville, Indiana, to sell their products.

“Back then we were just surviving. We didn’t look at glasswork as something we were going to do the rest of our lives—we saw it as a stepping stone to something else,” Jim said.

But, the artisans and craftsmen of Brown County changed their outlook, and their future.

“They suggested that we look at glass making as an artistic venture rather than just as a product to sell,” Jim said. “That really struck a chord with us. Something clicked and we began looking at our work from a whole new perspective. When we started to look at our work as art, we knew it was something we could do for the rest of our lives.”

From that moment on, Jim, John, and Dick focused on the artistic value of their pieces rather than on the monetary value. With a new enthusiasm, the three committed to learning as much as they could about glass work and spent nearly every minute of every day perfecting their trade.

“Glass is a very complicated material,” John said. “There are no shortcuts when learning to work with glass. The only choice is repetition and rehearsal. It’s not something you learn quickly. We would learn a simple step and repeat it thousands of times.”

“I remember struggling for years to learn how to make a bell,” Jim said. “I would get one part figured out and then a new challenge would come up. It took me 14 years to master the bell. There weren’t online videos or tutorials like there are today. We just had to learn by trial and error.”

Because each design took years to master, they knew it would not make sense for all three of them to learn how to make every design. Instead, they each took an area of focus. Dick’s expertise was in Christmas ornaments, Jim would specialize in animals, and John learned how to make pianos, motor bikes, and flowers.

Even after nearly 50 years of making glass, Jim said he learns something new every day.

“Every time you get a custom order that you’ve never done before you have to start all over,” he said. “And while we now know how to make hundreds of designs, we still specialize. There are still things that John is better at and things that I have more experience with. It really works out well.”

Today, the Lawrences have two stores in Nashville, both filled with a wide assortment of intricate glass pieces of all shapes and sizes and subject matter. Pieces include Christmas ornaments, flowers, animals, and countless other designs. One of the most popular items today is John’s delicately crafted hummingbird.

At both stores, the Lawrences give visitors the chance to watch them skillfully transform pieces of glass into art, demonstrating how they craft each item in the store by hand.

“It’s a lot of fun to work in front of people,” Jim said. “I get the chance to meet and talk to people from all over the world, which inspires my work.”

Jim said he is also inspired by the beauty of Brown County.

“Brown County is the perfect place to live and work. There is a great balance of activity and tranquility,” he said. “I get to spend the day talking with customers and then at the end of the day I get to drive out to my home in the beautiful and peaceful woods. It’s like my sanctuary where I recharge my battery.”

After working with his dad and brother for nearly half a century, John said he feels blessed.

“I’ve gotten to spend more time with my dad and brother and get to know them in ways that most families don’t get to,” John said. “We’ve been very lucky. We get to do what we love every day and make a living doing it.”

The shops are located at the corner of Franklin and Van Buren streets in Nashville. They are open daily and you can contact them at (812) 988-2600 or visit <lawrencefamilyglassblowers.com>.