Many fourth graders learned about the settling of the Indiana wilderness by reading of the adventures of a young girl named Susan Calvin and a doll companion that was handmade by her grandmother. Abigail, was named for the little ragdoll and was written by Portia Howe Sperry and Lois Donaldson in 1938. The doll came before the book and both were inspired by Portia Sperry.

In 1931, Portia and her family moved to Brown County from Fort Wayne, Indiana in the midst of the Great Depression. Her husband Ralph’s job ended with the bankruptcy of the piano factory where he worked, followed by the closing of RCA where he briefly designed radio cabinets. Portia described her family’s decision to move to Brown County in a story printed in the October, 1934 issue of the Woman’s Home Companion:

“I remembered a tiny village we had often passed in the southern part of our state. The folk, hardly more than five hundred in all, seemed kindly….Somehow my imagination took me straight there, where we could live for far less than in any city. We could have a garden and put vegetables and fruits for winter.”

The Sperrys and their children had to carry water from across the road of their first home in Brown County, and drinking water a quarter of a mile from higher up the hill. At the foot of the hill, they made their garden that summer. With the family toiling together in their plot, her son, Jim asked Portia through a beaming, dirt-and-sweat streaked smile, “People say you have to have money to be happy; we haven’t any money and we just couldn’t be any happier, could we?” 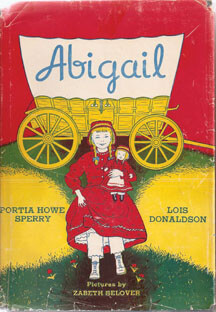 Ralph worked as a foreman at the Bessire apple orchards and Portia did several odd jobs before being asked by Jack Rogers to manage a small gift shop next to the Nashville House (now Spears Pottery). The family worked together and eventually moved to a more comfortable home. Ralph converted their henhouse into a workshop that winter and restored an old piano for the university.
That first winter inspired Portia to produce a doll for the shop she managed, Brown County Folks. She had been stocking the store with locally produced crafts such as pottery, wood carvings, woven fabrics, hand-braided rugs, and paintings.

Many hours were spent designing Abigail. The doll’s wig was made of cotton fabric strips and braided. Buttons, ties, and hooks and eyes were used on the clothing and shoes, just as real children’s clothes were fastened. The blouse and skirt were made of calico, with a white linen apron, shoes of oilcloth, and a bonnet. The facial features were painted using “fast dyes” by Carolyn Griffith, wife of painter L.O. Griffith. She created a carrier for Abigail using two Quaker oatmeal boxes fastened end to end, and covered over with wallpaper. Leather handles were added. Portia went door to door to find women who would provide the workforce needed to make the doll in quantity.
The Nashville House held a “Christening Party” for Abigail, the Log Cabin Doll, in February, 1932. Newspapers carried invitations to the party, and also wrote about Portia and the artisans who created Abigail. The publicity gained national attention.

Retailers such as the L.S. Ayres Company and Marshall Fields wanted to carry Abigail. People at the Quaker Oats company were so taken by the enthusiasm of Portia Sperry when she asked them about obtaining boxes that they donated the first hundred.

The Abigail doll has been made through the years under the direction of three generations of the Sperry family. Ralph and Portia Sperry passed a legacy to their family and beyond. The motto “Sweet are the uses of adversity,” appears on the family crest. An Abigail doll has a place on a corner of the crest along with garden tools, a cow, and a piano. Jim lovingly wrote in his book for the family, that his mother was a “liberal, liberated woman.” She was on the “cutting edge of women’s thoughts and ideas.” 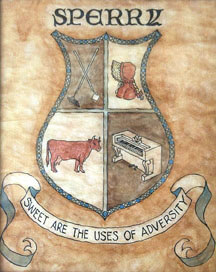 The Brown County Folks shop was in the Sperry family until 1984. Traces, the publication of the Indiana Historical Society, published a story about the Sperry family in its fall, 2001 edition entitled “Doing It Together.” In a fitting tribute to the spirit of Portia, Ralph, and their children Posey, Charles, Jim, and Emily, an exhibition opened in May, of that year at the Indiana Historical Society Headquarters called “A Working Life.”

The doll has been trademarked by the Sperry family and current production is under the care and oversight of granddaughters Sarah Mitchell and Abigail Sperry, who live about half an hour from Boulder, Colorado. Collectors will be happy to know that the doll is being fashioned after the Abigail of the 1940s era. Dolls can be ordered on-line at <www.Abigaildoll.com>. The website is an archive of the Sperry family and includes photos, articles, and letters.
You can also purchase an Abigail doll at Spears Pottery, located at the site of the original shop. The Abigail book is printed by and available from the Indiana Historical Society at their gift shop and online.

An Abigail doll will be part of a permanent exhibition called an “American Enterprise Exhibition” at the National Museum of American History of the Smithsonian. The exhibition will focus on the role of business and innovation from 1770 through 2010, and is scheduled to open on July 1, 2015.

American poet, James Russell Lowell, said, “Mishaps are like knives that either serve or cut us, as we grasp them by the blade or the handle.” The sharp blade of the Great Depression was handled by the Sperrys and their community as an opportunity to work together.