Horseshoes and Hand Grenades at the 2014 event.

“Hey Babe, ya wanna Boogie?” was the musical question John Hartford asked back in1971 on his album entitled, Aereo-Plain. If you answer John’s question with a “Yes,” then the John Hartford Memorial Festival is the place for you. This festival, in its fifth year, is a good place to hear an eclectic line up of the best acoustic music and musicians in the Midwest.

This year the festival is hosting forty-six bands—and that’s not counting campground pick up groups. I am talking top drawer, A-one, headliners like Hot Rize, Red Knuckles and the Trailblazers, New Riders of the Purple Sage, and the Hackensaw Boys. It also features local favorites The White Lightnin’ Boys, the Whipstitch Sallies, and the New Old Cavalry. Other acts include jug bands like The Fried Pickle Project. It is a very eclectic line-up and that’s because John would have wanted it that way. 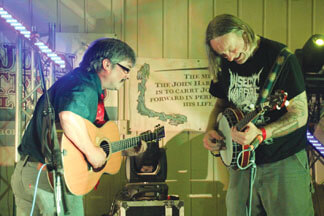 John Hartford was an eclectic musician himself. He didn’t like to be pinned down or pigeon-holed. He liked what he liked and if you liked it, too, then “Things couldn’t get no better.” That’s another Hartford-ism—in fact he worked it into a song called “Get No Better.” The refrain goes, “Just when you think it can’t get no better, then it does.” That is an example of John’s abiding optimism, which was one facet of a complex but fairly uncomplicated musical genius.

John was a study in “resolved” contradictions. He grew up in Missouri and learned to play the fiddle and the banjo by the time he was thirteen. He finished high school and attended Washington University in Saint Louis. After four years of working on a commercial arts degree, he dropped out to pay more attention to his music. He moved to Nashville (the one in Tennessee) to try his hand at making a living in the music business. He wrote songs, played some session dates and eventually came up with an LP’s worth of songs called John Hartford Looks at Life. It didn’t go too far. And then he came up with another album, Earthwords and Music, that included his song “Gentle on My Mind.” Glen Campbell did a version of it that went somewhere, and so did John—out to California.

Out in Hollywood Hartford appeared on the Smothers Brothers Comedy Hour and The Glen Campbell Goodtime Hour. Meanwhile, everybody else who had a record deal in the late 1960s did their own version of “Gentle on My Mind” and John found himself financially emancipated. With this new-found freedom he continued to experiment musically. In 1971 he put together an eclectic (there’s that word again) band. The group consisted of Norman Blake, best known for his old-time and folk duet albums with his wife Nancy; Tut Taylor, a middle-aged, flat-pickin’ Dobro player from Georgia; Vassar Clements, former fiddle player for Bill Monroe; and Hartford on banjo. 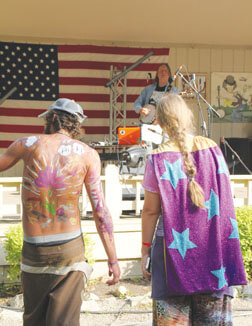 Known as the Aereo-plain Band, this group laid the groundwork for the next phase of Bluegrass, what has come to be called “Newgrass.” Hartford with this band made his debut appearance at Bean Blossom in 1971. I wish I could say I remember it well but unfortunately, I was off defending Bean Blossom from the Viet Cong that year. I have it on good authority that they gave a heck of a performance and paved the way for hippies to embrace Bluegrass music. So things, appropriately, come full circle and now the John Hartford Memorial Festival has found a home here at Bean Blossom.

Now, let me say a few words about the Bill Monroe Memorial Music Park and Campground because camping out at the festival is the way to go for maximizing your fun potential. The camp sites are not included in the ticket price so you need to factor in that extra expense. Contact the folks at the park to get prices and reserve a space. You can call them at (800) 414-4677 or (812) 988-6422. You can check them out on the inter-webs at
<www.beanblossom.us>.

If you haven’t been to the park before you are in for a very pleasant surprise. There is abundant parking and the campgrounds run the gamut from primitive tent sites to pop-up camper sites all the way to land yacht docking. The sites have a fire ring and room enough for your tent and your lawn chairs and your friend’s lawn chairs. If you tend to like to camp in comfort, there are electrical hookups and dump stations. They got clean restrooms and hot showers.

So, there you have it, a great setting, three days of wonderful music by more than forty groups and a place to hang out with old and new friends. It’s advertised as the “Most laid back festival in America.” What’s not to like?

Tickets are on sale on-line at <www.johnhartfordmemfest.com>. You can buy daily tickets for Thursday, Friday, and Saturday or three-day combos. You get a discount if you buy tickets in advance.
I hope to see you, as John would say, “Up on the hill where they do the boogie.”