Skip to content
Pamela Keech and The Emerald Pencil

Pamela Keech and The Emerald Pencil

The Emerald Pencil—the shop, studio, and home at the northeast corner of Jefferson and Main Streets in Nashville—is the latest result of Pamela Keech’s gift for following her bliss. No one could accuse Keech of coloring within the lines of predictability. This is what makes a visit to her shop and studio and a conversation with this “artist, curator, and writer” a rich experience.

“I didn’t start out to have a store,” Keech explains. “I wanted a place to have a studio, but this space had to be a shop, and it was perfect for me. I’m in love with old things that have history attached to them and I love things that are unusual, Every thing here has been carefully collected and curated for a variety of reasons. When customers come in, I give them some of the history.”
Looking for a memorable name that would “come up on Google really fast,” she found that she was drawn to those with two words, “one a color, one having to do with what I do. My drawings are important to me. I love to hold a pencil. And in 2013 Emerald was the Pantone color of the year.” 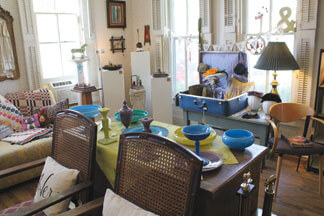 Both the Emerald Pencil’s collection of objects and price-spectrum are wide. Old tintypes sit comfortably with artists’ books and contemporary jewelry. Handmade quilts are slotted one by one in under-window shelves, and antique whisk brooms line the central staircase. Pieces of Cambridge glass, which link Keech to her her mother’s life in Guernsey County, Ohio, catch the light from high windows facing three directions. 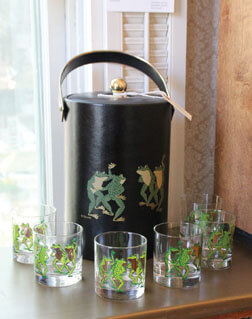 The Emerald Pencil’s precise eclecticism is of a piece with Keech’s taste and curatorial skill. She was an art major in college, taking, she says, “five years to become a sophomore.” She eventually dropped out, hitchhiked around the country, and created a clothing business in Atlanta.

She and her business partner sewed “bellbottoms with lace and doilies, which we sold to a fancy store.” The store burned, and she returned to school to “quickly” finish a BFA in visual art and costume design, and an MFA in what became installation art.

Her humor, ambition, and fearlessness are all apparent in her description of her final project: “For my thesis exhibition I wrote a faux Victorian murder mystery called Lust at Fox Gorge and built the setting in the university gallery—five rooms and a garden with a working fountain.“
During the years she was out of school, “women had become accepted as artists and art students. When I started college, there was no place for women in the art world.” While in Columbus, Ohio (her degrees are from Ohio State University) she worked in Ohio State’s costume department and in costume design for Opera Columbus. She moved from Ohio to Philadelphia, Pennsylvania where she was a commercial wardrobe stylist, “the most lucrative job I’ve ever had. It was exhausting.”

In 1982 she was a winner of The Rome Prize (hers was in Visual Arts), which is awarded annually by the American Academy in Rome to thirty emerging artists and scholars, “who represent the highest standard of excellence in the arts and humanities.”

She eventually settled in New York, where she became the Curator of Furnishings of the privately owned New York Tenement Museum on the Lower East Side, ranked number 28 of 1,626 things to do in New York City on the Trip Advisor website.

“I was charged with doing the research—what was the right thing for the family to have for the different time periods and different countries of origin.” She also had to provide detailed justifications for each purchase for each of the seven apartments and one saloon she ultimately decorated. There were no collections to draw on. She calls the rooms “forms of historical fiction” that required exhaustive searches of antique shops, flea markets and garage sales, and even raids on her personal collection. The last installation took four years to finish.

Her work with this museum led her to be considered an expert on mid-19th to mid-20th century material culture. And that led her to write a book entitled The Best Antique, Vintage and New Style Markets in America. Two of the 20 markets included are (partially) in Indiana.

She stayed in New York until after the death of her partner, an “irresistible man” who worked in film direction, whom she had met in Philadelphia. “I was done with New York. I just wanted to go someplace where life was easier.” She was drawn to Bloomington, where her two sisters now live, and eventually to Nashville.

Keech finds Nashville, “a little bubble of serenity. I just want to be here where you can do whatever you want and everybody has fun.” For more information on the Emerald Pencil, see <www.emeraldpencil.com> or call (917) 304-5285.