Ferrer Gallery, for 16 years the welcoming and intriguing space at the top of the stairs in the old Village Green building at 61 West Main, will close its doors December 13, 2015.

On display through the gallery closing is their final group show, “New Directions,” which commemorates their connection with the gallery and their lengthy friendship with one another, while pointing at possibilities for the future.
It is a bittersweet event for the three artists—Dixie and Dick Ferrer and Barb Brooke Davis—who have made the gallery and working studios their creative home. While they have loved their interaction with customers, many who return year after year, the successful gallery has required a great deal of time and energy.

“It’s been a helluva ride,” Barb Brooke Davis exclaims, “and we are still friends.” All the same, all three are ready for the change. “We’re all ready to slow our pace down, and speed up our production,” Dixie notes.

Two years ago the Ferrers built a studio next to their house in the woods, described by Dixie as an “enchanted” place. Both have noticed the impact of its serenity and the uninterrupted hours on the quality of their work. They also want to spend more time with their family: six children, 13 grandchildren and five great-grandchildren. Barb will move her studio to her home, also relishing the prospect of uninterrupted time to concentrate on new projects as well as more family-focused time. 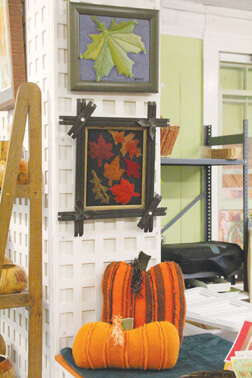 Barb, who had independent shops before joining forces with the Ferrers, celebrated her 35th Nashville October this year. All three have new or continuing Nashville gallery affiliations. Although they will be working at home, their work will still be available in other venues. 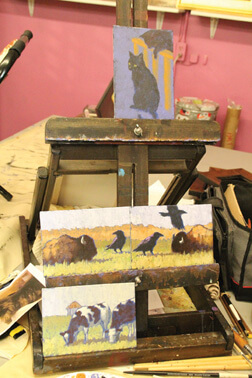 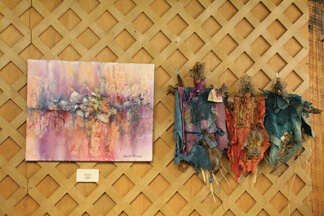 Before opening the gallery, Dixie had been in four different Village Green studios and Barb in three. At one time, all the space in the building had been devoted to artists’ studios. Dixie had a small gallery on the second floor and a teaching space on the third floor. The Ferrers expanded the gallery several years ago, as other second floor artists’ studios became available.

When they first opened the gallery and working studios, they thought they would never fill it. Smashing Designs with Susan Threehawks and Connie Simmonds were part of the original gallery and working studios group. Over the years they have had more than 120 different artists showing at the gallery. At their peak, they had 45 at one time. “The gallery has always been tightly juried. But there were a lot of people who came here who had never been anywhere before, but had quality work.”

Barb and Dixie have been friends for almost 40 years. Their kids went to the same pre-school in Indianapolis. “Barb taught me about running the business. I was a “loose” runner and Barb helped me to become better at business.”

Until four years ago Dick worked full time in Indianapolis and was in the gallery only on weekends. Dixie notes that, “When he retired and came in, it was a democracy, but women ruled. We worked really hard to make sure everyone was happy. It took about a year. “And,” Barb quips, “when Dixie’s not here, Dick and I play really cool music.”

All three want their customers and collectors to be assured that although the gallery is closing, they (and their work) will still be here in Nashville and available. All are willing to schedule appointments at their studios, and the Ferrers will continue to teach in various venues. “We’re not going anywhere,” Dick exclaims. “We live here.”