The Legend of
Picker Dan

Picker Dan was a little baby.
Sittin’ on his daddy’s knee
He picked up a little Mickey Mouse guitar
And said music gonna be the death of me.

Who is Picker Dan? Well, some folks say he’s just a feller in a story the old folks like to tell when the subject of music comes up. Others say that he’s real but they can’t say where he’s from or where he’s goin’. Still others, who have never seen him, say that Picker Dan is the spirit that lives in a sweet melody and a drivin’ rhythm. Sometimes, when the music hits you just right, you can see him out the corner of your eye, kinda in the shadows, tappin’ his toe and smilin’.

According to a reliable source, Picker Dan was born and raised in an overly large, northern city in an adjoining state. His musical talent exhibited itself when he was handed a baby rattle at six months of age. After giving the rattle a cursory inspection he immediately demonstrated several complex Afro-Cuban rhythms.

As a six-year-old, he could be found playing hot piano in some of his city’s seedier blues clubs, trading his skill on the ivories for an education. By the time he was ten he invested his talents playing hard-driving rock and roll guitar. His talent was raw and wild and Picker Dan knew that he needed to bring it under control. He decided to go to music school to learn how to rein in his gift.

In haste to bring some discipline to his prowess he enrolled in the Chicago Musical College at Roosevelt Univesity. He barely completed a semester when it dawned on him that he had made a terrible mistake. His desire to have his talent lovingly nurtured was only a passing fantasy. He realized that he and music school were just not made for each other.

“There’s a man of mystery roaming through the land. Far and near you hear of him; he’s found on either hand. So, if you hear somebody pickin,’ it’s likely Picker Dan.”

Once again Picker Dan was adrift in time and space. He roamed the country looking for a place to fit in and a style of music he could call his own. He liked Heavy Metal but was afraid it would lead to a hernia. He tried Disco but discovered he had allergic reaction polyester. Free Jazz made him feel trapped. Drum circles left him feeling beat. Grunge Rock was an insult to Picker Dan’s sense of hygiene.

It was a time when Picker Dan became just Dan. He gave up on music—or the music gave up on him. Either way, Dan tried his hand, or rather his voice, at a job in a tech support boiler-room. Hour after hour Dan would answer the phone and put people on Hold. He never got back to the people on Hold and they fired him. But it wasn’t Dan’s fault, not really, because Dan’s talent was music and did not extend to computers.

Dan, still feeling like there was no place for him in the world of music, did not know what to do next. He didn’t want to get another job. He found out the hard way that jobs are like Kryptonite to musicians. So he began to jog.
He jogged down one block and then another. He picked up speed. He was running. He didn’t know where he was running to or what he was running from. He ran in fair weather and foul, in daylight and dark. Across the landscape of America he ran. Rumors began spreading about him. Some folks said he was running from the Law
Some folks said he was running from a tragic love affair. No matter, Dan kept running. He had been back and forth and up and down the length and breadth of this great land when there just south of the cross roads of America, Dan stopped running.

Dan saw what was to become his destiny in the form of the words on a green sign “Bill Monroe Memorial Highway.” He picked up his pace again and in short order he saw another sign that said “Bean Blossom,” and a third that read “Bill Monroe’s Memorial Music Park,” where Dan directed his feet. When he heard the ringing of a banjo, the trill of the mandolin, a guitar bein’ flat picked, a fiddle singin’ out a melody, and all of it anchored by a solid thumpin’ dog house bass, Dan knew he had found what he had been looking for all his life—Bluegrass. 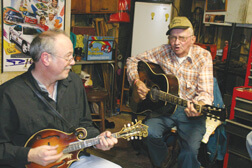 Very soon after finding the Mecca of Bluegrass music, Dan enrolled in the Otis Todd Institute of Advanced Country and Bluegrass Musicology. It was there that Dan met a few other fellers, not unlike himself, and they put a band together called The White Lightning Boys. No matter how often they gigged, Picker Dan still had talent left over.
When he wasn’t playing, he was thinking. When Picker Dan was thinking his thoughts were not always pure. They strayed towards the unnatural, like “Why does a man have to choose between his guitar and his mandolin? Why can’t he have both…and play them at the same time?” 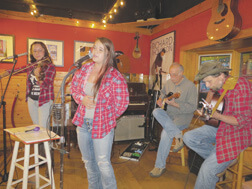 Luckily, Picker Dan did find more outlets for his obsessive need to make music. He was an integral part of the Keenan Rainwater band and the Indiana Boys. He plays with another picker prodigy and fellow White Lightning Boy, Barry Elkins, in a duo called Lucky and the Kid and with the Boxcar Annies, a band with Barry’s daughter, Heather Dawn Elkins, and Gabrielle Steenberger.

So that’s some of the story of Picker Dan the guitar man, the mandolin man, and all-round good guy. You can usually find him playin’ in one of the local venues, in one band or the other. If you’re you are listening to a smokin’ Bluegrass band, the feller on the guitar will likely be Picker Dan Bilger.