Skip to content
Bob & Chris Gustin Weaving a Life Together

Bob and Chris Gustin
Weaving a Life Together

To say Bob and Chris Gustin’s careers have woven them together would be a, pun-intended, understatement.

Since opening Homestead Weaving Studio in southeast Brown County 15 years ago, Chris has watched the sales of her hand-woven rugs, clothing, and table-runners sky-rocket. Bob arrived along with two goals: to reach the position of newspaper editor and, upon retirement, join his wife in the studio.

Bob stepped down as editor of The Republic newspaper in 2011 and spent few years on community projects. He recently partnered with Chris in the business.

“It was an adjustment for her to have me here full-time,” he said with a laugh. “But relationships are constantly changing. If we’re not flexible enough to be considerate of how the other person is adjusting to the changes…our relationship is the poorer for it.”

These two know that well. It’s not the first time they’ve worked side-by-side.

As a high school graduate, Bob packed his banjo and a guitar-playing buddy into his Oregon-bound Chevy. It wasn’t long before they found themselves out of money, picking strawberries as migrant laborers, and in need of a tow home to Colorado. He turned to his experience editing the high school newspaper. 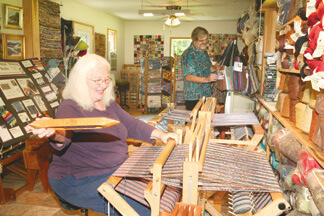 Chris first studied political science in college and then psychology, before happening upon a summer job as a newspaper ad saleswoman, getting her first taste of photography. She switched her major to journalism, later filling a fine arts requirement with weaving. After graduation, she set out to pursue folk singing in New York City. Instead, she became a book publisher’s editorial assistant. She soon left to work at a weaving school in Pennsylvania. But it wasn’t long before she followed “three hippies” launching a weaving shop in Boulder, Colorado.

Bob and Chris met in 1971 at a garage fire near Boulder. They discovered that the 10-by-50-foot construction trailer Bob cobbled into a home sat squarely next to the one Chris had just rented.

Chris taught Bob how to use a camera and got him a job where she was working as an editorial assistant at the University of Colorado.

Two years later, the now-married Gustins teamed up on the copy and photo desks at the Colorado Springs Sun newspaper. Bob soon moved on to a job in Scottsbluff, Nebraska on the condition that they hire Chris.

“We worked together quite well,” she said.

Bob explained, “We disagreed politically, but I overlooked that because of her beautiful soul.”

In Nebraska, Chris left newspapers and opened a shop selling weavings and macramé. By the early 1980s, Bob’s aspirations as editor moved the family, now including daughter Erin, to Indiana and the Evansville Courier. Chris’s weaving career took root in a studio above their garage. The family also welcomed a son, Andrew.

The two Evansville newspapers switched ownership in 1986, and Bob became managing editor of the Evansville Press. When Andrew entered school, Chris re-entered the world of journalism on the copy desk. In 1998, the paper closed.

From three job offers, Bob chose Columbus because of its proximity to arts-and-crafts-rich Brown County.

Chris has woven thousands of pieces, became a charter member of the Indiana Artisan organization, and is active in an array of arts and community organizations.

She said having worked together for so many years showed her how seriously Bob took his work and gave her empathy for his demanding position. But as he neared turning 60, Chris wanted him back. He retired the day after his birthday.

Chris reports that Bob has assumed responsibility for leading studio tours, maintaining her more than 20 looms, and doing a bit of weaving.

He recently sat weaving woolen suit scraps toted around since Pennsylvania in the 1970s, while Chris meticulously threaded a new warp. They take great pride in turning materials destined for a landfill into lasting pieces of art. Chris has woven with thousands of thrift store-scrap neckties, the selvedge edge of clothing, and upholstery trimmings from mills, paper, and even bubble wrap.

The volume of Chris’ weaving is slowing, though she still works 60 to 65 hours weekly. She’s known quite a few “old weavers” and plans to become one of them.

As they think about weaving this last chapter of their lives together, the Gustins can’t imagine a better setting. Chris said Brown County offers solitude when she wants it and the friendship of incredible artists when she needs it.

“We really do love it here,” Bob said. “It’s definitely the best place we’ve ever lived.”

Homestead Weaving is located at 6285 S Hamilton Creek Road, offering woven rugs, clothing, and gifts. They also carry looms and weaving supplies. They are usually open from 11 a.m. to 5 p.m. daily and10 a.m. to 5 p.m. daily during October for the Back Roads of Brown County Studio Tour. Call ahead at (812) 988-8622. The website is <homesteadweaver.com>.