Have you seen what is happening to the Brown County Art Gallery? The building at 1 Artist Drive is doubling in size from about 6,400 square feet to nearly 15,000 square feet.

Established in 1926, the Brown County Art Gallery originally was housed in a former grocery store but moved in 1968 to its current site on Artist Drive. It survived wars, depressions, recessions, fire, and relocation, making it one of the oldest galleries in the United States.

The Brown County Art Gallery is an asset poised to assume a greater role in the community. New features like the Art Education Center will provide aspiring artists encouragement and training to fulfill their potential, while the county itself should benefit economically from increased tourism. 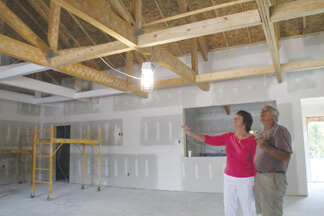 Chris Newlund, a Columbus artist who has paintings on display at the gallery, said the capacity to feature more art is a major plus. She said the real benefit of expansion, though, is that tourism is sure to follow. “There will be more exposure for my work and the work of other artists,” she said. “There is no more beautiful place than Brown County, and these improvements mean more people will be getting the chance to see it.”

The $1.7 million expansion project is being funded through monetary and in-kind donations. Contributions from area trusts include the Howard F. Hughes fund, the Brown County Community Foundation, Efroymson trust, and the Heritage Trust of Bartholomew County.

The Brown County Art Gallery Foundation owns the building and the permanent art collection. It leases space to the Brown County Art Gallery Artists Association, which in turn releases some of that space for use by Indiana Heritage Arts (IHA). The IHA sponsors a juried art competition each June that awards as much as $80,000 in prizes, and it displays a permanent collection of art. The Art Association and IHA pay approximately 30 percent of the cost of operating the building. The foundation raises the rest, partly by claiming a percentage of artists’ sales of consigned art, and partly from the financial and in-kind support of art lovers who believe in the gallery’s mission.

Over the course of any given year, more than 1,000 paintings are taken down so they can be switched out with others, depending on the needs of programs or exhibits. When those programs end, the art is switched back again.
“We have vaults spilling over, and we just need more room,” Letsinger-Miller said. “We shouldn’t have to take down art, ever. This expansion will allow everyone to exhibit at the same time, which creates a huge draw.”

The Glen Cooper Henshaw room currently serves a multiuse function. Instead of being surrounded by Henshaw’s works, a visitor currently sees those works only on one wall while the other three features unrelated works from other artists. The expansion will allow Henshaw’s full collection— about 90 pieces—to take over the room exclusively and permanently, as intended.

A new gallery will focus on the work of woodblock artist Gustave Baumann. The Art Gallery owns a collection of the artist’s work, and others are being pledged from his estate to round it out. Collectively, the Baumann works will be valued at more than $100,000.

Another new attraction will honor the work of the late bird artist Bill Zimmerman. The room will be set up just like Zimmerman’s actual studio, complete with a desk, paint brushes, and partially finished artwork.

There will also be a gift shop with books, videos, note cards, and prints, a new office space, and a history area.
High-tech improvements will connect the old and new sections of the building. The protection of millions of dollars worth of precious art had to be considered at all times. The project required the addition of special lighting to eliminate damage from ultraviolet rays, air conditioning systems to control humidity, and concrete fire doors and fire walls to replace the sprinkler systems.

“It’s great to see it all come together,” said Steve Miller, the architect, whose grandfather, Dale Bessire, was an artist who came to Brown County in 1913.

Twenty-seven speakers will carry music and sound through the facility, with off and on switches in each space. Eighteen security cameras positioned through the expanded building will feed into a centrally positioned office, providing an extra layer of security.

The studio space will provide a platform for lectures, special programs, and meetings.

The Oil Painters of America, the nation’s most prestigious association for artists, is talking seriously about bringing a national show to the facility in 2017.

“It’s not just tourism we’re generating,” said Letsinger-Miller. “We will draw a caliber of tourist that has money.”
The Art Gallery attracts about 6,500 a year currently, and that figure is expected to grow to about 11,000 after the expansion is completed and programs launched.

A Grand Opening Celebration will be held on Saturday, October 24. The event is a fundraiser and reservations can be made by calling the Gallery at (812) 988-4609.