Sometimes Nature takes its course, I reflected as I walked through Nashville after another hard rain, its power off, traffic lights out. I was here to talk with Larry Hawkins, owner of the venerable That Sandwich Place who, like the rest of town, was taking an unexpected afternoon off.
Nature has been hard on Hawkins this year, flooding his home earlier this summer while destroying much of his fabled collection of Indiana University basketball memorabilia.

“I couldn’t get anything else in here,” he says, looking, around his restaurant where framed pictures of Coach Knight and his players cover every last inch of the walls. “So I had it packed away in big tubs.” Water rose several feet in his store room, lifting the waterproof containers, turning them over, and popping open the lids. “Anyhow, that’s just part of life,” he shrugs, accepting what he can’t change.

Born in Hazard, Kentucky, Hawkins grew up in New Albany. He was working as a buyer for the Indiana Army Ammunition Plant during the waning days of the Vietnam War when his brother Bill called. While reviewing plans for the remodeling of the Ramada Inn, which Andy Rogers had recently purchased and renamed The Seasons Lodge, Bill had wandered down the stairs from Rogers’s Nashville House office, finding himself standing in a large empty space, a Jack LaChance mural stretching around the room’s perimeter. Bill thought it was the perfect spot in the perfect town to open the restaurant Larry had been talking about.

“My wife and I had a lot of friends in New Albany but we decided to take the chance and move up here,” he says. It was a decision they’d never regret.

“When I opened the restaurant, I ran an ad for help,” he remembers. “I seat 72 people in here, but the whole place filled up and I had a waiting line! I interviewed every one of them—it took me several hours.” Jeni Moberly was one of the first people he talked with. “I interviewed her right at this table,” he says, rapping the top with his knuckles. “She is the first person that I hired and she’s still with me.” he continues. “She has no faults. Never missed a day, never been late. If she has any problems, you’d never know it. Once she comes through that door, it’s all smiles.”

Just then Jeni comes up to refill my coffee.

“I’m just bragging on you, as usual,” he says, looking up.

“I need documentation on that,” she replies dryly.

Soon after, Larry added an ice cream shop to his businesses, and then bought the Nashville Express Tour Train. The train provides an introduction to Nashville and its history, as well as connecting the downtown to the area Inns. The first couple of years he drove it himself, after closing the restaurant in the afternoon. “As soon as I got out of here I’d run down and hop on the train and put my hand on the drive,” he laughs. “We had a lot of fun back then.

“I’m retirement age now so I sold the ice cream place and I’m in the process of selling the trains. This will be my only business.”

Of course, much of the legend of That Sandwich Place concerns Larry’s friendship with legendary basketball coach Bobby Knight. The walls are a shrine to the great Hoosier teacher. “After I met Coach Knight and became friends with him, I told my wife, ‘I’m going to collect everything I can on Coach Knight.’ This is how it ended up,” he shrugs. “Until then, I just had antiques on the wall. Every time I’d get another picture, I’d take an antique down.” 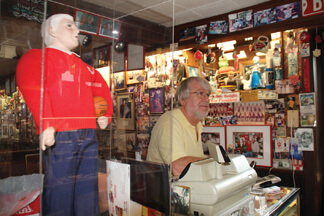 Coach Knight made sure that Larry had one of the best seats in Assembly Hall. “He set me right behind him,” he marvels. “Unbelievable ride I had for 20 years. I could write a book on what I saw. We still talk to each other a few times during the year. Every now and then he’ll pop in.”
It’s easy to see how Larry has built such a loyal clientele. Yes, he likes to talk, but he also listens, taking obvious delight in conversation. “Anybody who knows Larry Hawkins will tell you that I never stop talking,” he laughs. “What I enjoy about the restaurant business is that I’ve never had a day here when I didn’t have fun. A lot of people go to work and hate their job.

“I started here when I was 30 years old and I’m getting to retirement age, but I wouldn’t mind spending a few more years. It’s been my whole life. There’s a lot of fine people here.”