In the 1989 movie Field of Dreams, Ray (Kevin Costner), an Iowa farmer, hears a mysterious voice in his cornfield saying, “If you build it, they will come.” Cheri Clevenger, owner of Brown County Antique Mall, decided then that someday she would build her own field of dreams.

Cheri grew up in Indianapolis and moved to the country as soon as she was able to make it on her own. “I love small towns and people,” she says. “When I was growing up I wanted to live in a small, tourist town and have my own business.”

After working in the communications business for over 30 years and raising two children, Cheri finally got to have that dream business in Nashville, Indiana. On April 1 of 1995, she purchased the building. At the time, there were only a few dealers in the mall and it was mostly furniture. “It was already an antique business, but I only bought the building,” she explains.

Cheri likes to share the building’s history with people.
In 1968, Wayne Ogle sold his gas station in town and opened one on State Road 46 where the mall is now. A lawn mower shop was added later. After Wayne’s passing, Elaine and Norval Fishvogt purchased the building and opened an antique shop called the Yankee Dollar. They added on to the original building and built an upstairs area where artists could gather to paint and hold art classes. In 1989, Denver and Gladys Veteto purchased the business, renamed it BC Frontier Mall, and added the back section.

There are over 68 different booths in the mall now and some have been vendors for over 30 years. The two oldest dealers are 94 and the youngest is in her 20s.
Since the antique mall is located on Highway 46, many locals and tourists drive by the building and stop in to check out what’s new or just visit. As people enter the mall, Cheri offers cookies and coffee with a warm Brown County greeting.

“We have a lot of tourists, but we have a lot of regulars, too,” says Cheri. “We are seeing a lot of young people come in and some say they remember coming in with their parents as a child.”

Cheri believes the increase in younger patrons is due in part to Pinterest, a social network service that offers photo sharing among its members for creative ideas and projects. She also sees a lot of homeschooling families who bring their children in for a learning experience.
“I had one homeschool family recently that had their children purchase all their Christmas presents here,” she says.

The 7,000 square foot mall three miles east of Nashville offers thousands of items and is well organized. The atmosphere allows patrons to feel at home while shopping. In 2006, Cheri added an art gallery owned and operated by her son, Chris Powers, who deals in Indiana, American, and European art.

One of Cheri’s dreams is to have an antique village. There are two other buildings next to the mall that will eventually house furniture and estate items. They are currently being used for storage.

“There is always at least one customer every day,” she says. “Almost everyone leaves with one of the geodes to take back home in their suitcase as a souvenir from Indiana. Who would have thought you can make money from rocks. I guess they are our oldest antiques.” 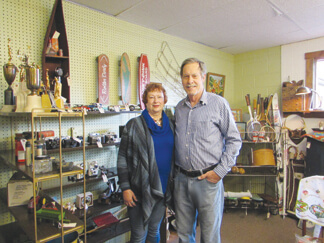 Cheri loves meeting people and making improvements to the mall, but she couldn’t do it without the help of her life partner and best friend, Terry Sumter. In 2007, the two met at a friend’s reunion and realized they went to the same high school, but never knew each other. A year later, they started dating. With Terry’s help, Cheri has been able to finish the renovations and make plans for more improvements.

In 2014, she had a setback. She was diagnosed with breast cancer. After six months of treatment, she started planning the renovations for the 20th anniversary in 2015.
The Brown County Antique Mall celebrated their anniversary with a grand re-opening in September. Cheri had a new sign made, repainted the building, added sidewalks, and replaced the roof. She also bought a vintage wagon for out front and had the parking lot paved.
As commuters and tourists travel on the state highway each day, Cheri is ready to welcome them to a little bit of Brown County history.