A covered bridge is one feature of by-gone America that inspires the warm sentimentality of the dreamer in all of us.

Brenda Krekler’s book, Covered Bridges Today, says that as many as 12,000 covered bridges once existed in the United States. That number dropped to under 1,500 by the 1950s. In response to this drastic loss, the National Society for the Preservation of Covered Bridges was formed in 1950. According to a study of the National Historic Covered Bridge Preservation Program administered by the Federal Highway Administration, the number of covered bridges in existence today is currently somewhere between 700 to 900 structures.

The first covered bridges in this country appeared in the early 1800s in the Eastern states, and until the early 1900s were constructed across the United States. They had timber trusses into the mid-1800s when the development of cheaper wrought iron and cast iron led to metal trusses, except where plentiful large timber was available. The covered bridges were built as a functional passageway for a community and often reflected the individual builders and architectural style of a specific time and place. 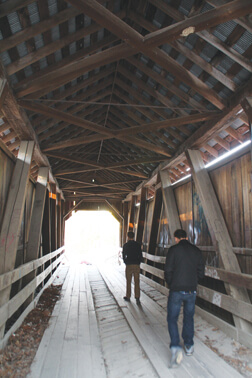 Many historians believe bridges were covered for practical and functional reasons. By covering the heavy trusses from direct exposure to the elements of sun and rain, the life expectancy of the bridge could be extended. Records prove that covered bridges would last up to three times longer than a non-covered bridge of similar size. Even though the roof and sidings would need to be replaced every couple decades, this was still more economical than complete replacement of the structure. The romantic lore of these bridges holds that having the appearance of a barn would have a calming effect on horses and other farm animals that had to cross waterways. Yet others think they provided safe cover for travelers during inclement weather.

In time, bridge and road design became more repetitive, so that the iconic covered bridges stood out and distinguished the areas where they were located. Even when steel construction became a more economical choice for bridge construction in the early 1900s, timber-truss covered bridges were still used well into the 20th century.

Brown County has two significant covered bridges within its boundaries. Spanning the Bean Blossom Creek on Covered Bridge Road, the Bean Blossom Covered Bridge was built in 1880 by Captain Joseph Balsey for the sum of $1,200. It is one of three in existence of the Single Howe Through Trusses design. Its largest span has a length of 57.4 feet. Its total length is 101 feet with a deck width of 11.8 feet. Its vertical clearance above the deck is 11.5 feet. As of 2012, the average daily traffic on the bridge was 38. It was on the main road to Nashville until 1936 when it was bypassed by State Road 135. It is located just south of where State Road 135 and State Road 45 intersect on Covered Bridge Road.

The Ramp Creek Covered Bridge is located at the North Entrance of the Brown County State Park over the North Fork of Salt Creek. Built by Henry Wolf in 1838, it is of the Double-barreled Covered Burr arch-truss design. It is the only double tunnel bridge in Indiana and is believed to be only one of four in the United States. Built originally in Putnam County, it was relocated in 1932 because of road construction. It was rehabilitated in 1986. Open to two-way traffic, the length of its largest span is 88.9 feet with a total length of 109.9 feet. It has a deck width of 23.9 feet with a vertical clearance above the deck at 9 feet. It was posted to the National Register of Historic Places on December 21, 1993. As of 2004, average daily traffic use was 143.

These beautiful artifacts remind folks of a time when travel was relaxed for all—man, woman, and beast. Their care and preservation is important to all Hoosier history.