The Hammer and The Hatchet

story and photos by Paige Langenderfer

The moment he heard her voice, John Bowyer knew he had found his musical soul mate. Bowyer had been dating Jayme Hood for a little while, but had never heard her sing.

“One night, we were at a jam and she just started singing harmony with me,” Bowyer said. “Her voice was perfect. I said, ‘You aren’t going anywhere,” and we’ve played together ever since.”

A year-and-a-half later, performing as The Hammer and The Hatchet, Bowyer and Hood have now played more than 150 shows and are working on their second CD.
“It’s been a whirlwind,” Hood said. “Everything has just worked out and we’ve gotten really good reception from people.”

The duo creates an original sound that is a mix of folk, bluegrass, country, and Americana music. The exceptional guitar and mandolin work fits perfectly alongside the duo’s gorgeous harmonies and beautifully crafted songs.

The name of their band, The Hammer and The Hatchet, came to Bowyer at the spur of a moment.

“We were driving to our first gig and trying to come up with a name, but we couldn’t decide on anything,” said Bowyer. “Then the organizer asked me what our name was and I just blurted out, The Hammer and the Hatchet.”

While Bowyer has played in bands for several years, starting in punk rock and moving his way towards bluegrass, this is Hood’s first on-stage endeavor. In the past year and a half she has taught herself how to play the guitar.

“I didn’t just want to be a background singer. I wanted to participate,” said Hood. “I just started picking up John’s guitar when he wasn’t home and taught myself.”

Naturally drawn to each other, the Nashville, Indiana based duo performs with a chemistry apparent throughout the interplay of their onstage personas as well as their intricate harmonies.

“Her voice makes my songs work,” Bowyer said.
The majority of the songs they currently perform are Bowyer’s originals, but the duo is planning to take a break from performing soon to work on their second CD which will feature songs written by Hood. 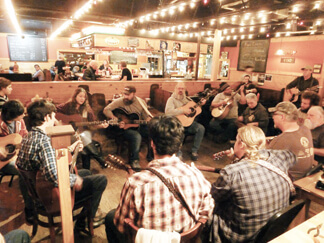 Along with their busy schedules, Bowyer and Hood take time to participate in the Tuesday Night Jam in Nashville. The Tuesday jam started out at the original downtown Muddy Boots location and now meets at the Pine Room Tavern in the Salt Creek complex. During warmer weather the jam meets outside at the Pavilion at the Village Green area. The Tuesday Jam has also filled a void that was left when Otis Todd stopped having his long-running Thursday night garage jam last year.

The sessions feature bluegrass music and usually meet from 7 to 9 p.m. They are open to everyone, all ages, and all skill levels.

“We play songs that everyone can wrap their heads around and join in,” Bowyer said. “We play the standards.”
The jam usually features anywhere from 10 to 30 musicians and instruments including guitars, mandolins, banjos and dulcimers.

Bowyer said he encourages even beginners to attend.
“When I was learning bluegrass, I attended a jam and they were really patient with me and taught me how to play,” he said. “It’s a fun and good way to develop.”

In addition to creating a lively venue to play bluegrass music, the organizers of the jam hope that it also helps continue the tradition of music in Nashville.

“Sometimes I think the musical talent in Nashville is overlooked,” Bowyer said. “There is a strong history of music in this community. It’s amazing to think about the number of really talented musicians who live right here in this little town. The name Little Nashville really is so true.”
To learn more about The Hammer and The Hatchet, search the name on Facebook.

To learn more about the Tuesday Night Jam in Nashville, search “Tuesday night jam in little Nashville” on Facebook.